I couldn not write about Eva without mentioning her elder sister, Constance.


“...two girls in silk kimonos both beautiful, one a gazelle” W. B. Yeats 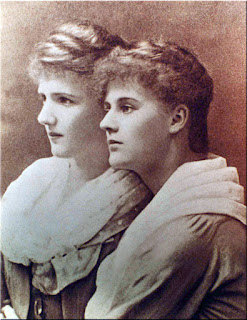 Eva and her sister Constance were described as being 'flamboyant' and 'reactionary'.  It sounds as though they were strong, independent women.  They were both passionate supporters of the growing feminist movement at that time and created a publication called "Urania", which discussed questions of gender and sexuality.  They were also actively involved in the political scene in Ireland.  The sisters died within a year of each other,.

Eva Selina Laura Gore-Booth was born on 22nd May 1870 in County Sligo, Ireland, the daughter of Henry Gore-Booth, a wealthy Anglo-Irish landowner.

As was usual for wealthy families in those days, Eva was educated at home by a governess who had studied at Cambridge and taught Eva music, drawing, poetry, Greek, Latin and Italian.  Shy, sensitive and not very strong, Eva began writing poetry at an early age.  Eva met the poet W.B. Yeats when he stayed at her parents’ home in 1894, and they discussed each other’s poetry.

In 1895, Eva became ill with TB and was sent to Italy to recuperate in 1896.   While there Eva met Esther Roper while staying at the home of George MacDonald, a Scottish writer.   Esther was the daughter of a factory worker who later became a missionary and was already involved in the women’s suffrage movement in Manchester, under the patronage of Millicent Fawcett.  Appalled at the treatment of factory workers, especially when compared to her own background, Eva decided that she had to do something positive.

On her return to Ireland, Eva started a branch of the Irish Women’s Suffrage and Local Government Association in Sligo.  She then moved to Manchester to share a home with Esther Roper, who remained Eva’s companion until her death.  They became joint secretaries of the Women’s Textile and Other Workers Representation Committee and started a journal called “Urania”, which was a vehicle for their pioneering ideas.  They were both very active in the emerging women’s movement, becoming involved in politics and campaigning for votes for women, as well as defending the rights of barmaids, flower sellers, women who worked in coal mines and circus performers.

In 1916, Eva campaigned for the release of her sister, Constance, who had been sentenced to death for her part in the 1916 Rising – The Easter Rebellion – the campaign during Easter Week 1916 to establish an independent Ireland and end British rule.

After the War, Eva and Esther joined the Committee for the Abolition of Capital Punishment and worked tirelessly in the cause of prison reform.  As time went by, Eva’s health deteriorated but she continued to write poetry as well as plays.  She died in Hampstead, London on 30th June 1926.

Eva’s poetry was highly praised by Yeats.  After Eva’s death, Esther collected her poems together, writing a biographical introduction to go with them. 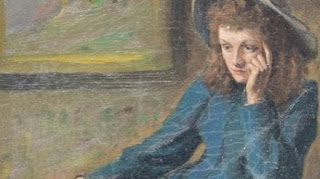 Portrait of Eva painted by her sister, Constance

Dear shadows, now you know it all,
All the folly of a fight
With a common wrong or right.
The innocent and the beautiful
Have no enemy but time;
Arise and bid me strike a match
And strike another till time catch;
Should the conflagration climb,
Run till all the sages know.
We the great gazebo built,
They convicted us of guilt;
Bid me strike a match and blow.

W. B. Yeats, "In Memory of Eva Gore-Booth and Con Markievicz" from “The Winding Stair and Other Poems” (Kessinger Publishing, 1933)

The Gore-Booths lived on a large estate in the north of County Sligo in a manor house called “Lissadell House”. During the potato famine of 1879 –1980, Sir Henry provided free food for his tenants. This instilled in both Constance and her younger sister,  Eva, concern for those less fortunate than themselves. The Gore-Booth children were educated at home, as was the custom at that time and Constance soon became an accomplished artist.

In 1886, Constance undertook a grand tour of the Continent of Europe and was presented to Queen Victoria at court in London. She decided to study art seriously and in 1892 she enrolled in the Slade School of Art in London. The move began Constance’s involvement in the women’s movement and she joined The National Union of Women’s Suffrage Societies. She then went to live in Paris, where she met Count Casimir Markiewicz, who had given up his law studies to train as an artist in Paris. Count Markiewicz was from a wealthy family of Polish land-owners in Zywotowka, in what is now The Ukraine. The Count’s wife died in 1899 and he married Constance in London on 29th September 1900. The couple had a daughter – Maeve, born on 13th November 1901 in Ireland – who was brought up by her maternal grandparents at “Lissadell”. 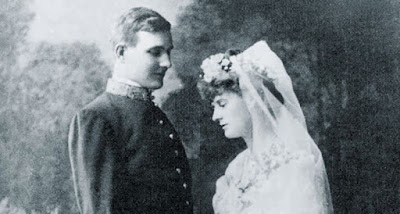 Constance took on the role of mother to her step-son Nicolas. The Markiewicz family moved to Dublin where Constance gained a reputation as a painter and the couple, moving among the literary and artistic people of Dublin, founded the United Artists Club, designed to bring like-minded people together. They attended the theatre, painted and held tea parties. During this period of her life, Constance became aware of the struggle for independence and became politically active, joining Sinn Fèin and Inghinidhe nah Éireann (Daughters of Ireland) and working among the poor.  In 1913, Count Markiewicz moved back to his Polish home, though the couple remained in close contact.

When her sister asked for her help during a campaign in Manchester, Constance went to her aid, driving a carriage drawn by four white horses to highlight the cause of women’s suffrage. In 1909, Constance founded Fianna Eireann, a para-military Scouts group for teenage boys, which led to the creation of The Irish Volunteers in 1913. Constance continued to take an active part in political demonstrations and in 1916, she took part in the Easter Rising. She was court-martialled and
sentenced to death, whereupon her sister, Eva, campaigned actively for her sister’s release. Constance’s sentence was commuted to life imprisonment and she was sent to Aylesbury Prison in England.

In 1917, following an amnesty, Constance was released from prison but she was imprisoned again in 1918 due to her campaign against conscription.

In the General Election of 1918, Constance was elected for the Constituency of Dublin St. Patrick’s, thus becoming the first woman to be elected to the House of Commons. However, she did not take her seat in the British Parliament. Instead, Constance was elected to the newly-created Dáil, becoming the first Irish female Cabinet Minister. She continued to campaign and was again imprisoned.

In the elections of June 1927, Constance was re-elected as candidate for the new Fianna Fáil Party but died on 15th July 1927 before taking up her seat. Her husband, Count Markiewicz, their daughter Maeve and her step-son Nicolas were at her side.

Photograph of Constance and Casimir on their wedding day.