Mabel Goode (continued from the post on 7th October 2017)

On page 53 of her diary, we read that Mabel has had a poem published in "The Yorkshire Herald", one of her local newspapers, on 31st October 1914.

Who are these who go where the bullets fly,
Where the shells come crashing down,
Where thicker, and thicker, the wounded lie,
In the ranks of the khaki brown?

All un-armed are they, neither sword nor gun
Do they bear for defence or hurt.
Then what do they where the ruthless Hun
Is doing his deadly work?

Though they bear no arms, they are fighting a foe
Whose touch ends our mortal breath;
Where their comrades are stricken and lying low
They are waging a war with Death.

Thus they count not their own lives to them dear,
So their comrades' lives be saved,
While they bind up their wounds, and with tender cheer,
Bear them back where the Red Cross waves.

Is not this a Christ-like work to do?
Can a "greater love" we see?
Then give we honour where honour is due -
To the men of the R.A.M.C.

From:  "The Lengthening War: The Great War Diary of Mabel Goode", edited by Michael Goode and published by Pen & Sword, Barnsley, Yorkshire, 2017. 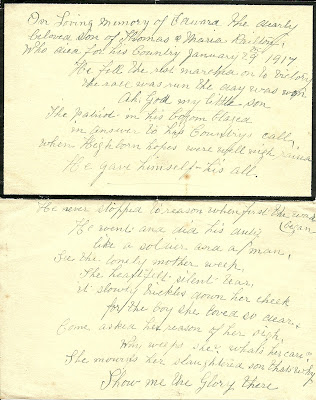 My grateful thanks to Victoria Doran who sent me this poem written by the mother of a soldier who fell in the First World War.


Maria Jackson was born in 1846 in Cumberland.  In 1869 she married Thomas Railton and the family lived in Holme East Waver, Wigton, a small market town in the county of Cumberland, which is now known as Cumbria, in the north west of England.
Maria wrote the poem following the death of her son, Edward, who was her youngest child.  He was killed while fighting in Mesopotamia in January 1917.

To find out more about the soldier, please see Victoria’s research and write up here: https://grangehill1922.wordpress.com/2016/09/18/edward-railton


I began my research into poetry written by women during the First World War by reading Catherine W. Reilly's anthology "Scars upon my Heart".  Then I discovered her "English Poetry of the First World War:  A Bibliography" and this has been my constant companion ever since.  I always check there first when I am researching a poet. I could not have made much progress without those two publications, so I felt I ought to add a tribute to Catherine W. Reilly's wonderful pioneering research into women's poetry of WW1.

Catherine Winifred Reilly was born on 4th April 1925 in Stretford, Lancashire, UK, the eldest of four children. Her mother’s maiden name was Macaulay and her maternal grandmother came from Ireland.  Catherine won a scholarship to Hollies Convent, a Roman Catholic Grammar School in south Manchester, which was evacuated to Clitheroe in Lancashire during in 1939.


When Catherine left school she worked for the public libraries in Manchester.  In 1947 she became Assistant Borough Librarian for Trafford in Lancashire.


Catherine is most famous for her war poetry anthologies:


For her research into the amazing “English Poetry of the First World War: A Bibliography” which took four years to complete at a time when the Internet was still a dream, Catherine was awarded a Fellowship of the Library Association.   In that work she identified 2,225 British men and women who wrote and published poetry or verse during the First World War, with a section at the back naming some of the Australian, Canadian, New Zealand, South African and American poets of the era.


In 1980, Catherine attended Merton College, Oxford where she studied for an M.Litt.  The result of that was “English Poetry of the Second World War: A Bibliography” which was published in 1986 by G.K. Hall & Co., Boston, Mass., USA.  For that work Catherine received the Besterman Medal for Bi*bliography.


*Title taken from a line in a poem by Vera Brittain.


**Title taken from a line in a poem by Frances Cornford.


***Title taken from a line in a poem by Mary Coleridge.

"Tipperary to Flanders Fields" a commemortion for Remembrance Weekend 2017 in Kent, UK 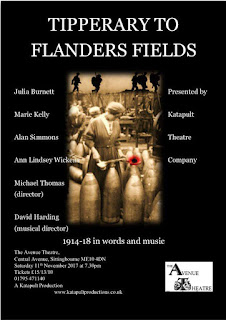 The UK Kent-based Actors’ Co-operative Katapult Productions presents "Tipperary to Flanders Fields" which commemorates the First World War in words and music, using some of the songs and poems from the era.  Some of the content tells the story of the women in WW1 in their own words.


Devised and directed by Michael Thomas the performers will be Julia Burnett, Marie Kelly, Alan Simmons and Ann Lindsey Wickens.
Performances of “Tipperary to Flanders Fields” will be held during Remembrance Weekend 2017 at the following venues:

Tickets available from the box offices of the theatres.