With thanks to Lynn Shillito, who is married to Evelyn's Great-Grandson, for contacting me and telling me about Evelyn and sharing her poetry collection with me. 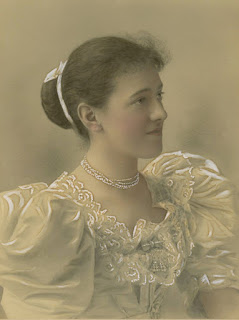 During the First World War, Evelyn and her daughter, Dorothy helped the war effort by caring for the sick and wounded.

Lynn Shillito is in the process of editing a new edition of  the collection of poems by Evelyn Shillito published in 1925 by “The Surbiton Times” with the title “'Patriot Mothers and other Poems”, after her untimely death in December 1924.

I have had the privilege of reviewing Evelyn’s poems, making just a few slight changes, and rearranging them into an appropriate order. Many of the themes are just as relevant today as they were in 1921, so it is a pleasure to freshen them up for today's readers to enjoy, 100 years later.

Through her poems we learn of the times in which she lived and of her dreams and her fears, written with such honesty and clarity; none more so than during and after the First World War. Her son Jim served in France in the 'Great War' (1914-1918), while back in the Home Counties, Evelyn and her daughter Dorothy were taking care of the sick and wounded with the British Red Cross. In her poems, Evelyn occasionally refers to Jim as John and to her younger daughter Marjorie as May.

​It is possible that Mrs. Shillito might have wished to make some emendations in these verses if she had known that they would be printed, but it has been thought better to issue them just as they were left by her.

The family have always had an interest in family history.  Once the ancestral boxes came out of the attic, I knew I had a job to do. Delving into Evelyn's life has been really enjoyable. As a family we knew and talked about her Archery winnings, a poetry book was quietly mentioned, along with a Christmas carol, (which we had recorded in December 2021).

One of Evelyn's poems:

Beloved! Now so far from me, alas!

My thoughts stretch out to bridge the rolling sea

Between us, that in spirit I may pass —

The superstitious sailor, I am told,

Above all other things a caul doth prize,

Because he thinks ’twill save him from a cold

And though I smile at the credulity,

Which prompts a man to carry such a charm;

Fond dreams and tender fancies come to me,

Born of my wish to shelter thee from harm.

Would I might weave, upon the loom of prayer,

With warp of love and woof of ardent zeal,

A web, invisible and light as air,

Fine as a silken thread, yet strong as steel.

For of such fabric, I would make a shield

An all protective covering for thee

The which should keep thee safe on battlefield

And help thee to confound the enemy.