With many thanks to Phil Dawes who has researched Ella M. Stratton for me.  This is what Phil wrote:

Ella Mary Stratton was born on 31st July 1898, in the village of Haverigg, near Millom in the Coounty of Cumberland, which is now called south Cumbria.  The area was at that time a centre for iron ore smelting.  Her father was the Reverend Watson Stratton, curate at St Luke’s Church, a small Anglican Chapel-of -Ease.  Ella’s mother was Sarah Stratton, nee Simpson and her parents were married in Huntingdon in 1862.


Ella’s father was not the typical churchman and his modest curacy probably reflected his modest background which was as a Fenland farm labourer’s son.


On the 1911 census, Ella was a 12 year old schoolgirl. Her father was by then curate of St. David’s Church in the tiny village of Airmyn near Goole, Yorkshire. He was a regular contributor to the local paper on a wide range of topics including the natural world and growing vegetables.

In 1914 Ella’s poem ‘The Navy’ was selected by Dr. Charles Forshaw for inclusion in his anthology ‘One Hundred Best Poems on the European War by Women Poets of the Empire’. It was written when she was just 16 years old.


A brief report of Ella’s marriage in the “Telegraph” gives us a glimpse of her achievements prior to June 1932, when she married Ewart John Buxton, a dentist, at Peterborough Cathedral.  She is described as ‘Ella Mary Stratton MBBS London, MRCS, LRCP, DTM’.   From this we can infer that she attended the London Royal Free Hospital School of Medicine for Women and that she qualified as a doctor and subsequently became a surgeon.


A slightly longer report from the “Derby Times” of 13th June 1932 gives us an added dimension: Ella is described as a doctor who has been working for three years in the Gold Coast, West Africa for the British Government.   It appears that she had only just got back in time for the ceremony in the Cathedral as she was wearing ‘travelling clothes’ rather than a wedding dress. We also find that both her parents are dead, hence perhaps the note that the couple ‘were married quietly’.  Ella was given away by her cousin Alex Shelton, from Ramsey in the Fens.


The newlyweds settled down in Marlborough, Wiltshire, where Ewart worked as a Dental Surgeon.  In those days it was still normal, even obligatory in some professions, for a married woman to give up work. On the 1939 war-time census we find that Ella’s  job is listed as ‘Unpaid domestic duties’, but she must have told the enumerator of her previous career as underneath is written: ‘Medical practitioner, retired’.  Another note tells us that both of the Buxtons were doing wartime duties during the Second World War for the Air Raid Patrol by ‘assisting at local First Aid Post’.


Ella and Ewart must have eventually retired back to the region of her birth in south west Cumbria. Ewart died in Ulverston district in 1976 and Ella died in Barrow-in-Furness district in 1981, aged 83.


Ella’s poem “THE NAVY” was published in “One Hundred of the Best Poems on the European War by Women Poets of the Empire”, Edited by Dr. Charles Forshaw, FRSL, founder of the International Institute of British Poetry (Elliot Stock, London, 1916)


Long, low, dark and grey,
Sinister warships at break of day,
Silently steaming our coasts around,
Straining at the leash as a tracker's hound.


Small, dark periscope top,
Showing a moment, — the next to drop,
Shattered at last by a gunner's skill.
One less submarine working ill.


Long, lean sides of the ship
Leaving no chance for torpedo to rip,
Searchlight so dazzling revealing the night,
Speed — to o'ertake the foeman in flight.


Men of the Navy, we give you your due,
None so enduring, unselfish as you,
Giving your all in the rush and the strife,
Guarding our honour and guarding our life.
Posted by Lucy at 06:07

My thanks to Carley for asking me to research Helen Lanyon.


Helen married Charles James Lanyon, great-grandson of Sir Charles Lanyon the Irish architect, on 23rd August 1902. In his obituary in 1940, Charles's wife Helen was described as the “distinguished poet” and mention was made of her poems about the Antrim Glens and her collection entitled “The Hill O’Dreams, and other poems” (published in Dublin by Sealy, Bryers and Walker in 1909).   The poem “At Easter” is included in that collection.  This was set to music by the composer Sir Herbert Hamilton Harty (1879 - 1941).  Hamilton Harty joined the Royal Naval Volunteer Reserve during WW1 and served in the North Sea.


Helen and her husband had a daughter called Carla Lanyon Lanyon who was also a poet and writer. Carla seems to have married Edward S Hacker in 1927 and they had a son.


With thanks to history researchers Sue Robinson of Wenches in Trenches the Roses of No Mans Land and Kate O’Mara for their help in finding out when Helen was born, was married and died.


All we need now is a photograph of Helen Lanyon.
Posted by Lucy at 06:26

Zelda Frances Annie West was born in Bangalore, Madras, India on 10th February 1875.  Her parents were Francis West and his wife Caroline.


I haven’t been able to find out anything more about Zelda or if she wrote any other poems.  She was alive in 1947.  If anyone can help please get in touch.


Source:  Find my Past and Catherine W. Reilly “English Poetry of the First World War A Bibliography” (St. Martin’s Press, New York, 1978)
Posted by Lucy at 11:11


With many thanks to 'Michael Bully' who reminded me that I had not yet researched or posted A.E.G.  Michael has a wonderful website dedicated to the Sea Poetry of the First World War and has recently started a website about the poetry of the Second World War:


Frederick, who was educated at Harrow and Trinity College, Cambridge, had joined the Volunteers while at university.  Frederick was called to the Bar, Inner Temple in 1895.  In 1893 he joined the Post Office Rifles as a Reserve Officer and in 1899 the Militia of the Royal Munster Fusiliers.  He served in South Africa during the Boer War and was awarded The Queen’s Medal in 1902.


As a Reserve Officer, Frederick volunteered for active service on 6th August 1914. He attained the rank of Captain and was posted to France with the Royal Munster Fusiliers on 22nd September 1914.   He was killed on 9th May 1915 near Richbourg l’Avoue but was initially reported as wounded and missing, which must have been very hard for Alexandra, of German birth and with three sons, one of whom was also fighting in France - Hugo Frederick joined the 1st Battalion of the 44th Foot Essex Regiment as a 2nd Lieutenant and was killed on 28th June 1915 fighting in Gallipoli.  He was mentioned in despatches.   Hugo was buried at Twelve Tree Copse Cemetery in Gallipoli.


Godfrey was killed during the Second World War in June 1942.


Alexander went on to become a Governor of Hong Kong and the Hong Kong Fire Service named a fireboat in his honour.


Alexandra’s WW1 collection “Mater dolorosa” was published in 1915 by Heinemann and dedicated to Hugo Frederick Grantham.


Further books published by Alexandra are listed here: https://www.amazon.co.uk/Books-Alexandra-EtheldredGrantham/s?ie=UTF8&page=1&rh=n%3A266239%2Cp_27%3AAlexandra%20Etheldred%20Grantham
Posted by Lucy at 03:08 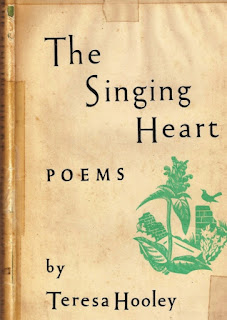 My thanks to John Seriot whose question about the poem “A War Film” prompted me to research Teresa who is on my list of Female Poets of the First World War and to Debbie Cameron who found Teresa's First World War work record card.


Basil served with the 7th Battalion of the Sherwood Foresters and was a tank commander at Amiens in 1918.  He was awarded the Military Medal in November 1918 for conspicuous gallantry, survived the war but died in the Influenza Epidemic of 1918.

During the war, Teresa did her bit, working at home: 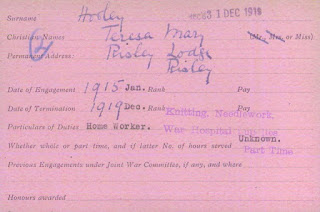 Teresa married Frank H. Butler in 1920 but the marriage does not appear to have lasted.


Teresa’s most famous poem “A War Film”, which is still in copyright but you can read  here https://allpoetry.com/A-War-Film, is the subject of much discussion, including this weblog https://thebioscope.net/2010/02/24/a-war-film/


I agree with the writer that the poem would have been written during the 1920s.  Here’s why:


The “Old Contemptibles” Association (of which my Grandfather was a member and a President), was formed a few years after the end of the First World War in 1925.


Although there were films shown during the conflict, the film “Mons” about the retreat from did not come out until 1926.
Teresa’s poem “A War Film” was included in her collection “Songs of all Seasons”, published by Jonathan Cape in 1927.


Her other collections were:

NOTE:  “The Old Contemptibles” was the name given to the British professional soldiers who went to Belgium and France between August and November 1914.  They were awarded a special medal – The Mons Star.  The term was possibly coined by the British Propaganda Bureau who spread the word that Kaiser Wilhelm held the British Army in contempt, saying that his forces had been stopped by a “contemptible little army”.  Apparently this was not true but the name stuck and an Association of Old Contemptibles was formed in 1925.