With thanks to Historian Debbie Cameron and Geoff Harrison who both sent me copies of Kate Rawlins’ poem “The Hospital Suit” and to a dear friend who found and sent me numerous mentions of Kate in newspapers that enabled me to complete the research for this post. 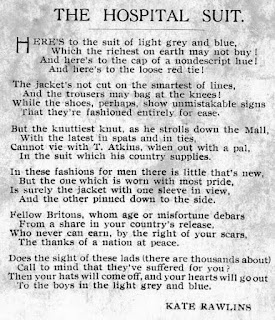 Born Kate Gibson in Gravesend, Kent, UK in 1867 and baptised on 18th August 1867, Kate’s parents were Eliza Gibson, nee Williams, and Samuel Lodwick Gibson, who were married in Lambeth, London in June 1853.  Kate’s father was a builder, carpenter, wheelwright (like his father) and undertaker.

In September 1895, Kate married Thomas Griffin Rawlins, a commercial traveller, in Wandsworth.  The couple had two sons and two daughters. The family moved to Bexhill-on-Sea in Sussex, where Thomas died in December 1919.

A letter dated 6th September 1915 that Kate sent to the “Bexhill Chronicle”, where she was on holiday, enclosed a war poem entitled “The Lads are coming home” written by her.  Kate mentioned that she was sending the newspaper the last in her “little series of war poems”. 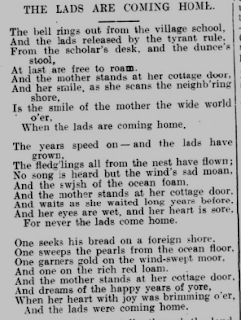 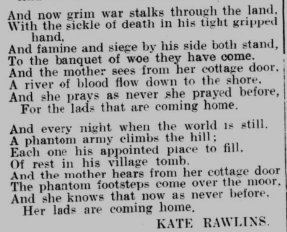 “The Bexhill Observer” of 14th September 1918 reported that Mrs Kate Rawlins was the “Collector of the Sussex Prisoner of War Fund”.

Kate’s death on 9th July 1932 was reported in the Bexhill local press.  Her Obituary mentions that Kate’s WW1 poem “The Hospital Suit” was sold in postcard form in aid of the British Red Cross during the First World War and that she was a Life Governor of the Royal East Sussex Hospital as well as a keen member of the local branch of the British Legion.

The newspaper the Bexhill Observer of 13th January 1917 reported that Kate’s poem “The Hospital Suit” had been set to music by “the well-known songwriter Mr Sedley Taylor, an officer who has been at the Front and is now recuperating his health”.   The article goes on to explain the inspiration behind the poem, which was often performed as a recitation, was “… while so many sang the praises of khaki, the light grey and blue did not meet with very much recognition.”   The song was performed at a benefit concert by “the famous Welsh baritone Mr Ceredig Walters.” 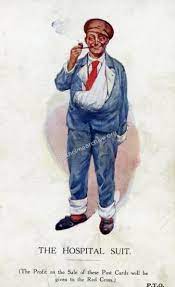 Kate seems to have been a prolific poet -another of her poems was entitled “Doing our Bit”. I would love to know if any more of Kate's poems are in existance anywhere.

On 2 July 2016, during the unveiling of a WW1 memorial in Eastbourne Kate’s poem “The Sussex Hero” was read by Spyke Baker.  The poem was about Sussex WW1 hero Nelson Victor Carter, who was killed in action during the Battle of the Boar’s Head on 30th June 1916, whilst rescuing wounded soldiers from No Man’s Land For his bravery he was subsequently awarded the Victoria Cross.