Being Young in the First World War Conference

News just in that a WW1 Conference entitled Being Young in the First World War is to be held at Manchester Metropolitan University, Manchester, UK on Saturday, 7th November 2015.
Professor Maggie Andrews and Professor  Jean Webb from University of Worcester will be keynote speakers. Other speakers are drawn from Britain, Belgium, New Zealand, France and Canada,  speaking on topics including Orphans, Boy Scouts, Art and Literature, School Curricular, Propaganda, Disability, and Women’s Radical Movements.

To book your FREE place for the Being Young During World War One conference, go to www.beingyoungww1.eventbrite.co.uk

For more information about the conference, please see the conference website at www.hssr.mmu.ac.uk/mcrh/ww1/beingyoung  or email Jennifer.Doherty@scll.co.uk 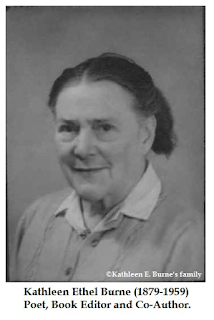 I am celebrating National Poetry Day in the UK with a poem by a First World War poet discovered by Lesley Young.  Many thanks to Lesley for getting in touch with me and sharing her findings which began when Lesley found a book of poems among her Great-Grandfather's half sister's possessions.

Kathleen Ethel Burne was born in Kensington on 11th May 1879.   Her father was Thomas Burne, who worked as a clerk in a colliery in Durham, and her mother was Mary Isabella nee Simons.   The family moved to London in 1864 when Thomas worked for the Civil Service, re-organising the War Office accounts during the Boer War, a task for which he was awarded the Imperial Service Order.  He then became an Officer's secretary at the Royal Hospital, Chelsea. Thomas and his wife had several children, among them Adeline, Godfrey, Cecil and Ormond, who went to teach in Germany.  One of Thomas and Mary's sons and a grandson became mining engineers.  Thomas died on 22nd March 1903.

Kathleen died after an illness aged 80 on 10th June 1959 at the Hostel of God, Clapham Common, but her WIll states her usual residence was Lake Cottage, Bobbolds Farm, Milland, Liphook, West Sussex.

Kathleen's poetry collection "Poems by K.E.B. " includes several poems written during the First World War and was probably printed in around 1926.  Lesley's copy is hand bound with a hand-painted cover. 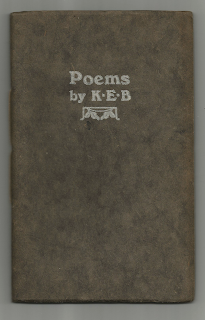 Sources:  Information supplied by Lesley Young who has carried out extensive research on the life and work of Kathleen, and members of Kathleen's family who supplied personal information to Lesley.  Kathleen's family have very kindly given me permission to share some of her poems with you, which I plan to do over the coming months.

Here is one of those poems:

Background to the poem:

In 1914 the German Kaiser invaded Belgium, which had previously declared itself neutral in a treaty dated 1839.  During The First World War, the Chancellor of Germany dismissed that treaty as "A Scrap of Paper. Looking on the British Newspaper Archives - there are several poems about "a Scrap of Paper" that date from 1914/1915 published around the country.   The comment clearly enraged the British public and inspired many to write poetry.

Good faith is but a phantasm, and honour but a name:
Yet the little hosts of Belgium have won undying fame;
Yea, they shall live for ever, though their homes go up in flame,

Though their mortal bodies perish in direst agony,
Though the foeman's heel is on their neck, and their helpless children flee,
Though their women tread an alien soil in homeless misery.

As they have kept their honour, will England keep her faith;
She will stand by her gallant comrades till she draws her last breath;
She will fight for that scrap of paper to the very gates of death.

And you, O perjured Kaiser, when your thunder-bolts are hurled,
When the day of reckoning comes at last and the flags of war are furled,
May find that a scrap of paper has changed the face of the world.