Found for us by Great War researcher, member of the Great War Group, ex-primary school teacher, museum volunteer Judith Jones. Judith contacted me to ask if Sylvia Colenso was on the List of Female Poets - well she wasn't so I must add her.  Thank you Judith.

Sylvia was the Granddaughter of Bishop John Colenso, Bishop of Natal in Africa.

An article written by author Nick Gammage gives us some important clues to Sylvia’s identity: Sylvia Colenso was born in 1887 in Marylebone, London, UK.   Her parents were Francis Ernest Colenso, a barrister and actuary (who was the elder son of Bishop John Colenso), and his wife, Sophie J. Colenso, nee Frankland. Sophie’s father was Sir Edward Frankland - an emminent scientist;  her mother, Sophie Fick, sister of the physician and physiologist Adolf Eugen Fick, was German - from Kassel in Germany. As a consequence, Sylvia spoke German and frequently visited her Grandmother’s family in Germany.  Incidentally, Sophie and Adolf Fick's nephew, Adolf Gaston Eugen Fick, invented the contact lens and was the author of Fick Principle. It is used in Intensive Care Units worldwide to help save lives daily.*

Sylvia’s siblings were: Esmond (who died as a baby), Eothan, Irma and Nigel.

The Colenso family had a house in London and, from the Autumn of 1901, a house in the Buckinghamshire countryside in Amersham.  The house was called “Elangeni”, which is a Zulu word (and also the name of a Zulu tribe) meaning “where the sun shines through“, reflecting Sylvia’s Father’s childhood in Africa.  The 1911 Census lists the family as living in “Elangeni” with Sylvia’s occupation as musician.

Sylvia had a poem entitled “Man’s Lot” – translated from German - published in an anthology of anti-war poems edited by Bertram Lloyd and published by G. Allen & Unwin Ltd., London in 1918 -  “Poems written during the Great War, 1914-1918”.

Sylvia became an accomplished pianist, and accompanied the first recording of Nkosi Sikelel I Afrika (now the South African national anthem) in 1923.

In 1938, she married Ernest Bertram Lloyd (14 May 1881 – 9 June 1944)   in Cardigan, Wales. Bertram, who was a naturalist, humanitarian, vegetarian and campaigner for animal rights and founder of the National Society for the Abolition of Cruel Sports, was also a fluent German speaker.  In 1939 Sylvia and Bertram lived at 53 Parkhill Road, Belsize Park, Camden, Hampstead, London, UK.

The earth is soaked in blood, and underneath

These – peasants, teachers, flock and those who led –

One volley swept into the arms of death.

The thought that victory, peace and joy

This was the last fond hope which seemed good,

And comfort brought to many a dying boy.

But some there were to whom in their last hour

Were granted vision clear to see and know

That out of slaughter death anew would spring,

That vain each off’ring to war’s evil power –

Translated from the German

Judith makes a very good point about that poem: “It sends shivers down my spine to read 'Man's Lot' and know it was written in 1918, or earlier, by someone who was half-German and would live to see it all happen again. Her vision was certainly clear.”   (with thanks to Linda.@SE25A for spotting the typo which I have corrected.)

Photograph of Sophie, Irma and Sylvia Colenso found for us by Judith Jones.

* With thanks for additional information re Adolf Eugen Fick to

With grateful thanks to Liz Tobin for finding the poem that sparked off this research, and to Annette Fulford for finding a great deal of information about Margueretta 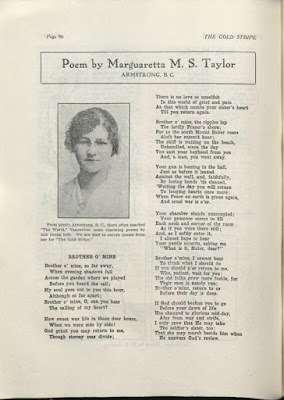 Margueritta had a poem published in “The Gold Stripe”, edited by Felix Penne, pen-name of J. Francis Bursill. The publication was “published as a tribute to the British Columbia men who have been killed, crippled and wounded in the Great War”. "The Net Profits of this Publication will go to the Amputation Club of B.C., Vancouver, for men who have been maimed and wounded in the Great War."

Margueretta Stuart Taylor was born in Scotland in around 1899.  Her parents were William Taylor and his wife Margaret Taylor, nee Stuart. Annette tells us that in the 1911 and 1921 Canadian Census, she is listed as Margaret Taylor. Both records indicate the Taylor family went to live in Canada in 1905.

According to Margueretta’s obituary she became a teacher and taught at Hastings School in Canada from 1921 until she retired.   In Vancouver in November 1929, she married William Dennis Nash (1896 – 1939), who was born in Lewisham, London, UK and worked for the Hudson Bay Company in Canada. The couple had two daughters.   Margueretta died on 26th September 1982. 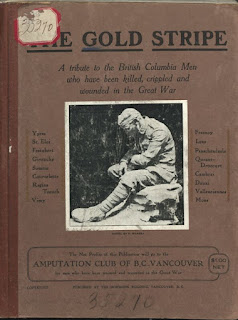 I wonder if she wrote any other poems?

If anyone knows please get in touch. 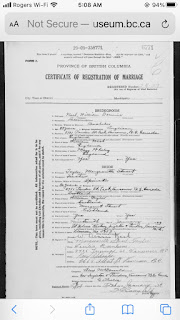 Report of the death of William Dennis Nash from the Province Newspaper December 15, 1939, page 9.

Was Eva also a poet - that is the question

I have not been able to discover much about her but it seems that Eva was born on 13th July 1866 in Naini Tal, Bengal, India.  Her parents were John Forbes David Inglis and his wife, Harriet Lowis Inglis, nee Thompson.

An article by Hamish MacPherson about Dr. Elsie Inglis suggests that Eva was Elsie’s younger sister -

“Her younger sister, Eva Helen, would later become Eva Shaw McLaren and write her big sister’s biography, “Elsie Inglis, The Woman With the Torch”, on which my account of Elsie greatly relies.” https://www.thenational.scot/news/18426143.greatest-scot-many-talents-dr-elsie-inglis/

In the book Eva wrote about Dr. Elsie Inglis -  “Elsie Inglis The Woman with the Torch” by Eva Shaw McLaren, with a preface by Lena Ashwell (Society for Promoting Christian Knowledge, London, 1920) – we find this poem:

Battling with hostile winds and tide,

And left the door behind them, wide.

Diggers for gold where most had failed,

Smiling at deeds that brought them Fame,—

Lighters of Lamps that have not failed,—

Was the poem written by Eva?  I have not been able to find out anything more about Eva.  If anyone can help please get in touch.

John Forbes David Inglis and his wife, Harriet Lowis Inglis, nee Thompson. had six children in their 'first family' George David (b 1847), Amy (b 1848), Cecil (b 1849), Hugh (b 1851), Herbert (b 1853) and Ernest (b 1856).[6] In 1856 John Inglis arranged to take the family home to Britain for a period of leave of three years. This proved to be a prolonged journey which took 4 months to reach Bombay and a further 4 moths by sailing ship round Cape Hope to reach England. He was recalled early to India in 1858 because of the Indian Rebellion and returned leaving his family in Southampton. George, Hugh and Herbert were sent to school at Eton, Cecil to Uppingham and Ernest to Rugby, while Amy was looked after by relatives. Once they were settled and events in India were back to 'normal', Harriet Inglis returned to India in 1863 and they had the 'second family' of three further children, Eliza Maude (known as Elsie) (b 1864), Eva Helen (b 1866) and Horace (born 1868). Elsie Inglis, who became the most famous of the children, was born in the Himalayan hill station town of Naini Tal, in the state of Uttarakhand, When the Inglis family moved to Tasmania the Inglis girls were tutored by Miss Knott, a disciple of Dorothea Beale, a pioneer of education for women.