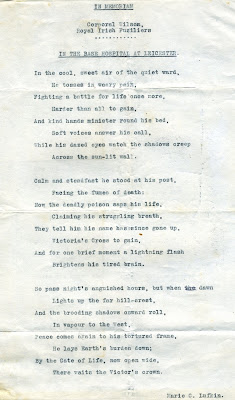 I had a request some time ago from Nicholas Miller, a serious amateur historian with a particular interest in following first-hand accounts of events. Nicholas is from Newcastle and he had found a poem by Marie and the information about the man it is written about - Corporal George Wilson - among some papers belonging to a nurse at the 5th Northern Base Hospital in Leicester.  Her name was Helen Freer and she was the wife of a local dignitary who lived at The Stoneygate, Leicester. She was a volunteer and fund-raiser during WW1.

Nicholas wanted further information about Marie and I was able to find out a little about her.
Marie Christiana Lufkin was born in Middlesex in 1864.  Her parents were George Lufkin and his wife Elizabeth Christiana Lufkin, nee Harvey.  George was an Architect Surveyor who worked for the British Government in India.  Their other children were Helen Elizabeth born 1862, Clara Harriett, born 1865, George Harvey, born 1867 and Ursula Maud, born 1868.

In 1871 the family lived in Thistle Grove, West Kensington.  Elizabeth Christiana Lufkin died in 1873.  By 1891 the Lufkin family were living at Beaconsfield, Grange Road, Sutton, Surrey and George was a widower. The family went to live in Parkstone, Dorset when George retired and Henry became a Church of England clergyman.   In 1911, Helen, Marie, Clara and Ursula were living with their father in Poole, Dorset. And Ursula Maud was a hospital trained nurse.


It seems likely that Marie may also have trained as a nurse or that she volunteered to work as an orderly for she was working at the 5th Northern Base, Leicester during the First World War.  However, there is nothing on record at the Red Cross, who kindly checked their records for me for both Marie Christiana Lufkin and Maud Ursula Lufkin.


Marie never married and died in Devon in 1936.


Here is another of Marie C. Lufkin's poems:


'THAT we may bear His beacon lamp aloft,


Till all false ideals shrink beneath its ray,

Our sacred trust from all the ages past ;


For this, Life's heritage, the sword we wield.


E'en though our dear ones, to His bugle call,


We must the sooner yield.

And they, who hearing, pass to fuller life,


With clearer vision shall look forth and see


Something of that vast, wondrous plan which works


From :  Volume 2 of  "One Hundred of the Best Poems on the European War" Edited by Dr. Charles Forshaw, FRSL,  Founder of the International Institute of British Poetry, published by Elliott Stock in 1916.


Photo:  Poem by Marie C. Lufkin typed on a piece of paper, courtesy of Nicholas Miller.
If anyone has any information about Marie or Corporal Wilson, please get in touch.  I should also like to find a photograph of Marie.
Posted by Lucy at 07:29