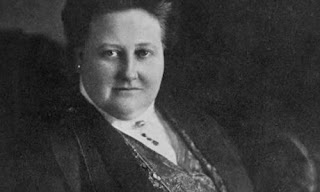 Amy was a Pullitzer Prize-winning, cigar-smoking poet from Bookline, Massachusets America. She coined the phrase “unrhymed cadence” for blank verse.   In London during 1913, it was Amy who asked Rupert Brooke to ‘speak up’ when he read his poems at The Poetry Bookshop.


Another collection, with the title of “Sword Blades & Poppy Seed” was published in 1914 by Houghton Mifflin & Co., New York.


Amy died in 1925 and was buried in Mount Auburn Cemetery, Cambridge, Massachusets.
https://archive.org/stream/menwomenandghos00lowegoog#page/n8/mode/2up

Many thanks to "In the Know" who pointed out that Hilary Douglas Clark Pepler (HDCP) should be on the list of Forgotten Poets and not Female Poets.  This will be put right forthwith.  I must admit that I did put a question mark against the name in Catherine W. Reilly's "English Poetry of the First World War A Bibliography" (St. Martin's Press, New York, 1978) and had not got around to researching Hilary.   Hilary, as "In the Know" points out is both a male and female name in the UK and indeed I have a cousin Hilary and a cousin Elliott, who are female and a neighbour called Cameron who unlike Cameron Diaz is male.

I am indeed grateful to the eagle eyes of those 'in the know' who are helping me compile a list of both male and female poets of the First World War.

My current project is the poets who were involved in WW1 in 1917 as it was the year in which my Great Uncle was killed.  He was lost on Easter Monday, 9th April 1917 at Arras.

Now to include Hilary on Forgotten Poets of the First World War.
Posted by Lucy at 06:17

My grateful thanks to Lesley Young for providing the following information:

Kathleen Ethel Burne was born in Kensington on 11th May 1879.   Her father was Thomas Burne, who worked as a clerk in a colliery in Co. Durham, and her mother was Mary Isabella Burne, nee Simons.   The family moved to London in 1864 when Thomas worked for the Civil Service, re-organising the War Office accounts during the Boer War.  He then became an Officer's secretary at the Royal Hospital, Chelsea. Thomas and his wife had several children - Adeline, Godfrey, Cecil and Ormond who went to teach in Germany.  One of Thomas and Mary's sons and a grandson became mining engineers.  Thomas died on 22nd March 1903.

Kathleen attended boarding school in St Andrews, Fife  in 1891 and went on to study at Girton College, Cambridge in 1901.   From 1907 until 1925, Kathleen worked as private secretary to Edmund Lamb MP at his estate in Borden Wood, Essex, where she lived at 3 Garden Cottages, Borden Wood.   During that time Kathleen helped Edmund Lamb research his book ‘Some Annals of the Lambs: a Border Family’ published in 1926.

Sources:  Information kindly supplied by Lesley Young who has carried out extensive research on the life and work of Kathleen, and members of Kathleen's family.

The little lamp burns bright; the Babe
Lies in the manger there;
The mother bends above; her hands
Are clasped in praise and prayer;
Her tender face a-light with love
Looks down upon Him there.

Female Poets of the First World War Volume 2 now out 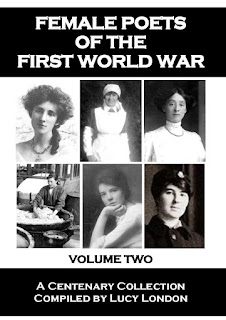 In time for Christmas.   Volume 2 concentrates on British poets and features some of the lesser-known women writers.  Also featured is poetry written by Munitions Workers and Schoolgirls, plus a guest article about poetry and knitting in WW1 by Phil Dawes.

To order a copy please go to http://www.poshupnorth.com/2016/09/female-poets-of-first-world-war-volume-2_27.html