A Message from Bairbre O'Hogan about the commemorative events held in Ireland marking the 50th anniversary of Winifred M. Letts' death 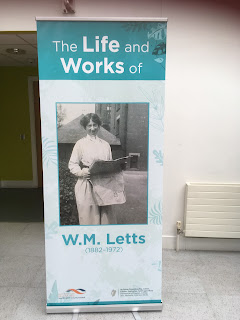 As many of you do not live in Ireland, it was not possible for you to attend the June 2022 events marking the 50th anniversary of W M Letts's death  . You may be interested in some of the media coverage of one of the events - the unveiling, in Rathcoole Church of Ireland, of a memorial plaque and a sculpture.  Unfortunately, South Dublin Libraries were not in a position to record the symposium, nor the launch of the exhibition, on 9th June 2022.

If you have access to Facebook, you could search for Unveiling of a memorial plaque to poet Winifred Mabel Letts which is on the 'DublinLive' Facebook page.

The local newspaper, Echo, on 9th June 2022 also covered the Rathcoole event - the article is here, but I know people are wary of clicking on links:

The Echo is to publish another piece on Letts in the near future.

At the launch of the exhibition, Aileen Lambert, a traditional singer from Co. Wexford, performed her setting of Letts's The Harbour - https://www.youtube.com/watch?v=B-M0wy0Sy1Y

I would like to correct one statement  -  W. M. Letts was not buried in an 'unmarked grave' - she was buried with her husband in a Verschoyle plot, but her name had not been added to the headstone. In advance of these celebrations, this omission was rectified.

I will finish with an entry from her diary in which she described her ideal burial place:

“It may be untidy but I'd rather have nature make and keep my bed... To be covered by ivy and wood sanicle and primroses, for beech leaves to make me a winter coverlet, and rabbits and squirrels for company would be all to my taste. And if relations came later to see my grave they'd come merrily for picnics ...”  Winifred Mabel Letts

Let us merrily remember Winifred and share her writings with new audiences!

With thanks to Historian Debbie Cameron who found the poem by Donnett Mary Paynter entitled “An Apology for what we wear”. I wonder if Donnett wrote any other poems – I have so far not been able to find any but in my experience it is rare for people to ‘only write one poem’. See my thoughts by following this link: 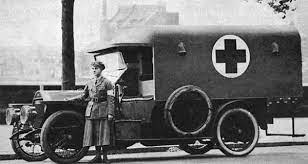 During the First World War, Donnett Mary volunteered to serve overseas in the First Aid Nursing Yeomanry. She served in France from 9th February 1917 until April 1919. She was Mentioned in Despatches on 31.12.18

The photograph (left) is of Donnett with her motor ambulance given by her father, Commander Hugh H. Paynter, R.N. for use at the FANY Convoy. Miss Paynter's mother founded, and for a year, worked at the Royal Flying Corps Hospital for Officers.

Incidentally, NOTES ON COPYRIGHT IN PHOTOGRAPHS  (United Kingdom Law) Generally speaking any photograph taken and published in the UK before 1945 will now be out of copyright. Anything taken before 1945 and published before 1993 will be free of both copyright and publication right.   Copyright in photographs taken before 1 June 1957, when the 1956 Copyright Act came into effect, is governed by section 21 of the Copyright Act 1911. This applied a standard 50-year term to all photographs, irrespective of whether they had or had not been published.

The First Aid Nursing Yeomanry was founded in 1907 by Edward Baker - the idea being that medical aids on horseback would be able to access the wounded quickly. Baker explained:  “During my period of service with Lord Kitchener in the Soudan Campaign, where I had the misfortune to be wounded, it occurred to me that there was a missing link somewhere in the Ambulance Department which, in spite of the changes in warfare, had not altered very materially since the days of Crimea when Florence Nightingale and her courageous band of helpers went out to succour and save the wounded.

On my return from active service I thought out a plan which I anticipated would meet the want, but it was not until September 1907 that I was able to found a troop of young women to see how my ideas on the subject would work. My idea was that each member of this Corps would receive, in addition to a thorough training in First Aid, a drilling in cavalry movements, signalling and camp work, so that nurses could ride onto the battlefield to attend to the wounded who might otherwise have been left to a slow death.”  Captain Edward Baker 1910

The Royal Flying Corps Hospital opened in May 1916 in a house lent by Lady Tredegar.  In June 1916 the King sent a gift of wine for the use of the wounded officers there.

The Hospital was the second to open in London specifically for members of the Corps.  The first, in Dorset Square, remained the Headquarters and a Convalescent Home was set up in Freshwater in the Isle of Wight.  The Hospital was affiliated to Queen Alexandra's Military Hospital.  It had 20 beds, 12 of which were donated by Lady Tredegar, who also contributed to the maintenance fund for the running costs.  Princess Christian gave a substantial donation towards the cost of the equipment and Lady St Helier presented some beds and other practical gifts, as well as obtaining financial assistance. (Lady St Helier befriended the Canadian Billy Bishop (1894-1956), an observer for the Royal Flying Corps, who had sustained a knee injury in May 1916 and was a patient at the Hospital.  She enabled him to be accepted for training as a pilot as the Central Training School at Upavon, Salisbury Plain.  Bishop went on to become the top flying ace of the British Empire, with 72 victories.)

In March 1917 the King and Queen visited the Hospital.  By that time, following the great expansion of the Corps, the development of aerial fighting and the physical effects of constant flying at great altitudes had greatly increased the number of sick and wounded officers.  The accommodation at the Hospital was proving insufficient and the Committee launched an Appeal for funds for expansion.  Lady Tredegar, who already had a ward named after her for her generosity in allowing the use of her house, contributed £375 to cover maintenance of the Hospital for six months and one additional bed.

In addition, another property was secured in Eaton Square to become a sister hospital.Both Hospitals closed in 1919.  NOTE: To have an idea of what £375 would be worth in 2022, you need to multiply the sum by 200.

"An Apology for what we wear" by Donnett Mary Paynter, handwritten in a notebook for a fellow FANY volunteer

Oh you who criticise the clothes

Or lack of them, as worn

By members of the female sex

Who rise at early dawn

And carry on throughout the day…

We’re sorry if our garb offends

When you observe a skirt that reaches

To the knees only of our breeches

We do not wear for choice you see

So do not blame us overmuch

Find my Past, Free BMD and