Keen writers from Cleveleys Writers Group (Susan Pugh - Chair, Malcom Brocklehurst - President, David Neal - The Codgers Poet - and Stan), David Riley an author from Blackpool, Elaine Edwards, a Curator from The National Museum of Scotland, Edinburgh and Sylvia joined us at Fleetwood Library to read some poems and talk about war in general and WW1 in particular.

Dawn Spooner from Fleetwood Library very kindly supplied the group with tea/coffee and biscuits which was very welcome.

David Riley started proceedings by reading "To Helen" a poem by soldier poet Edward Thomas who was killed in the same battle (Arras) and on the same day (9th April 1917) as my Great-Uncle James.

David had visited the Exhibition of Female Poets, Inspirational Women and Fascinating Facts of the Great War at Fleetwood Library earlier in the month and wrote a very nice review:  http://www.altblackpool.co.uk/female-poets-world-war-one-exhibition-fleetwood-library

David's review has brought in e-mails from around the world - thank you David.

Susan, Malcolm, Stan and David Riley all read poems they had written and David persuaded Elaine to read one of his poems written from a women's point of view.

Susan's poem was about the sea front at Fleetwood, Malcolm's, entitled "Silent Night 1914 ... A Winter's Tale" was about the Truce on Christmas Eve 1914.  Malcolm also read a poem written by a Fleetwood High School pupil.

Elaine told everyone about the National Museums of Scotland's plans for the coming Centenary Commemorative years, including exhibitions about 'next of kin' and 'the symbolism of the poppy'. 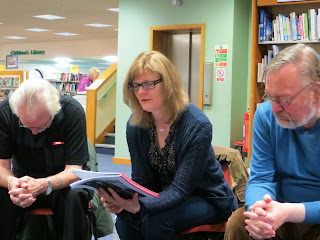 Stan read a poem about WW1 written in Lancashire Dialect.

Sylvia started a lively discussion about some of the books she has been reading and David Neal brought along a copy of his recent publication"Lens and Lines", featuring 'staged themed images' by photographer Nicola J. McKenna and poems by David B. Neal.   This is available as an e-book from David's website www.codgerspoet.co.uk or by find out more by sending an e-mail to thecodgerspoet@rocketmail.com

Dawn mentioned that the exhibition, which has to finish today - 30th November 2013 - had attracted a lot of interest and several people had asked about the accompanying book - Female Poets of the First World War Volume 1 - details:
http://www.poshupnorth.com/2013/08/new-title-female-poets-of-first-world.html 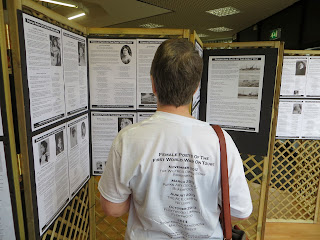 Here is the latest list – November 2013.  I find new poets and interesting information almost every day.  If you know of any poets I have left out, please get in touch.  I am particularly keen to find poets from Luxembourg, Thailand and from African countries but all poets of that era are welcome and I would like to enlist your help in finding them.

Someone asked if I was only including 'professional' poets.  Definitely not - as far as I am concerned you do not have to be a 'published' poet to write poetry.   Do have a look at what Dr. Olson said in his review of George Bruce's anthology which I put on the weblog www.femalewarpoets.blogspot.co.uk earlier this year.   I agree with Bruce about poetry - this was not always the case but the past year has led to amazing discoveries and helped me to change my mind.

In his WW1 poetry anthology “The Sweet Red Wine of Youth” Nicholas Murray mentions that he has not included women because “they did not fight”. But many of them did and at least two of those women soldiers were poets – they are on this list but I have not yet been able to find any biographical details, photographs or poems by them.

As my research has progressed, it has become very clear that there were far more women who wrote poetry during the 1914 - 1918 period than the few mentioned in many of the anthologies compiled so far.   I feel strongly that their voices deserve to be heard.

MARSLAND, Elisabeth A. Ed.- “The Nation’s Cause  French, English and German Poetry of the First World War”. (Routledge, Oxford, 1991)

ZUBER, Terence. "The Battle of the Frontiers  The Ardennes 1914" (The History Press, Stroud, Gloucestershire, 2007)