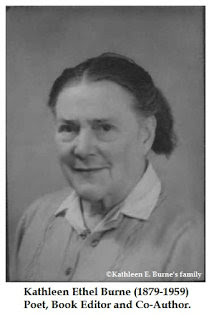 Kathleen Ethel Burne was born in Kensington on 11th May 1879.   Her father was Thomas Burne who worked as a clerk in a colliery in Co. Durham and her mother was Mary Isabella Simons.   The family moved to London in 1864 when Thomas worked for the Civil Service, re-organising the War Office accounts during the Boer War.  He then became an Officer's secretary at the Royal Hospital, Chelsea. Thomas and his wife had several children - Adeline, Godfrey, Cecil and Ormond who went to teach in Germany.  One of Thomas and Mary's sons and a grandson became mining engineers.  Thomas died on 22nd March 1903.

Kathleen's poetry collection "Poems by K.E.B. " includes several poems written during the First World War, one of which is this Chrstmas-themed poem:

Christmas Eve, 1916 (page 28)
The little lamp burns bright; the Babe
Lies in the manger there;
The mother bends above; her hands
Are clasped in praise and prayer;
Her tender face a-light with love
Looks down upon Him there.

Information and poem kindly supplied by Leslie Young and Andrew Burne
Posted by Lucy at 00:33

Viv Newman kindly sent me the following information about Marjorie Kane Smyth: Marjorie was Australian - she lived in New South Wales.  Her father may have been a clergyman because she passed Junior examinations at the Clergy Daughters' School in 1904.   She was one of the earliest Australians to volunteer as a VAD during the First World War.  She arrived in Egypt on 12th October 1915.   92 Australian women served in this capacity.   Marjorie worked at No. 1 Australian General Hospital, 'Heliopolis Palace', a large complex which, according to the Hospital records, was in 'the land of the Pharaohs'.  It was a 750 bed hospital (increasing to 1,040 on arrival in France) from January 1915 to March 1916.

In Egypt, the hospital cared for patients from Gallipoli and was then transferred to France.  Marjorie was attached to the Queen Alexandra's Imperial Military Nursing Service and served with the hospital until June 1917.  She was awarded the 1914-1915 Star, as well as the War and Victory Medals.  It is possible that she died in around 1935 as that is the last time she appears on the Electoral Roll.

With many thanks to Viv Newman for finding this information out for me.  Dominic Sheridan is currently researching Australian First World War Poetry.  Dominic has a Facebook Page where you will find lots more Australian WW1 poets - https://www.facebook.com/australianwarpoetry/?fref=ts

More information about the Nott Sisters

I have just received a wonderful e-mail with additional information about the Nott Sisters from Anthony Richards, to whom I am extremely grateful.  Anthony read Phil Dawes' contribution which I posted in February 2015 about the Nott sisters and has this to add from his personal knowledge :

"The article on the Nott sisters, Jane Protheroe, Martha Lucy & Mary was hugely informative with amazing research by Phil Dawes, but there are some extra details and clarifications which you might find useful.

The first clarification is that 'Felixstowe' is in Bristol. It was the name of the house in which the sisters started their school in Clifton.  Studying Street Directories I can see no mention of premises where the sisters could have set up a private school as early as 1893.The first house in which the school is mentioned is 6 Downside Road, acquired in 1900 from Will E Young J.P., and renamed 'Felixstowe'. In 1905/6 the school moved to larger premises, a full 40 yards away, at 1 Upper Belgrave Road. The house was named 'Tresilian' when they acquired it but it too was renamed 'Felixstowe'. When the school moved out in 1912/13 the house became known as Downs View, which it still is today (it looks out over the Clifton Downs). The third and final house was acquired and used from 1913 to 1930 and, you guessed it, renamed 'Felixstowe'. That was about 500 yards away in Clifton Down, next to what is now the Mansion House. The previous owner/occupier was Harry Beloe J.P. when it was known as 'Salcombe House'.

As you know, the school was taken over by the very successful Duncan House School and survived to 1967. The house in Clifton Down continues to be known to this day as 'Felixstowe', even in reference books, a small mark the Notts have left for posterity, although the context is entirely lost.

Your article mentions Jane's attendance at the Bristol School of Science and Arts and her prize, but there are also articles in the Bristol Mercury (24th July 1884 & 23rd March 1885) regarding further prizes. I intend to try to look these up. A very minor point: you talk of Marlu's education; the school in question is actually 'Redland High School' (no s on Redland), still a successful girls' school in Bristol today. Your article also mentions the sisters' parents moving  into the school with them when they were at 1 Upper Belgrave Road. They had been living close by at 51 Apsley Road before this, and this is the address the sisters moved back to when they retired in 1929/31."

Anthony has also sent some wonderful photographs, some of which I hope to be able to post shortly.

Thank you again to Anthony and to everyone who is helping with this commemorative project.
Posted by Lucy at 01:29