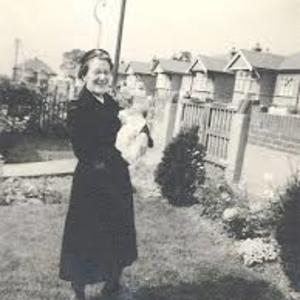 I am trying to find information about WW1 Female Poet Marjorie Wilson, who used the pen name ‘Town Girl’ for some of her poems which were published in “The Children's Newspaper”. Marjorie was a sister of WW1 soldier poet T.P. Cameron Wilson, who was killed on the Western Front in 1918. However, she is very hard to find.

The death of T.P. Cameron Wilson was reported in the "Derby Daily Telegraph" of 8/4/1918: ”… His two sisters are nurses. One is at Netley Hospital, and the other is with the Duchess of Sutherland's nursing staff in France. Practically the whole of the family have given themselves up to the service of their King and country”.

The only mention of one of the Rev. Theodore Cameron Wilson's daughters I could find that could possibly fit with the dates of Marjorie's birth is for Alice Margaret Wilson - Daughter - Single - Female 25 - born 1886 in Devonshire Torquay on the Census record for 1911: Census For England & Wales - St Luke's Vicarage, Bristol, Gloucestershire, England. (Note - It is usual for the Census to record a year following the year of birth.)

During WW1 it seems the Reverend T Cameron Wilson was Rector of a church in Little Eaton in Derbyshire.

Dr Connie Ruzich kindly sent me the following information : The death of the WW1 soldier poet T.P. Cameron Wilson was reported in the "Derby Daily Telegraph" of 8/4/1918: ”… His two sisters are nurses. One is at Netley Hospital, and the other is with the Duchess of Sutherland's nursing staff in France. Practically the whole of the family have given themselves up to the service of their King and country”. " www.britishnewspaperarchive.co.uk/viewer/bl/0000327/19180408/019/0003

Dr. Connie Ruzich on her website Behind their Lines shows us a memorial for a Marjorie Wilson, daughter of the Rev. Theodore Wilson, in St. Peter's Church, Blaxhall, Suffolk, UK, which tells us that Marjorie was born on 4th June 1885 and died on 9th September 1934: The inscription reads "To The Dear Memory of Marjorie Wilson, daughter of the Rector of Blaxhall" The memorial shows an angel comforting mourning children, and it was designed by Dorothy Rope. 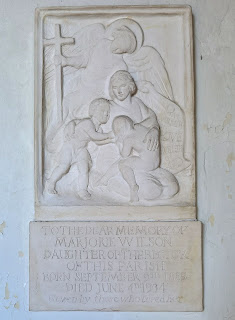 The photograph of Marjorie is from https://allpoetry.com/Marjorie-Wilson

To Tony (Aged 3) (In Memory T.P.C.W) by Marjorie Wilson
Gemmed with white daisies was the great green world
Your restless feet have pressed this long day through-
Come now and let me whisper to your dreams
A little song grown from my love for you.
There was a man once loved green fields like you,
He drew his knowledge from the wild bird’s songs;
And he had praise for every beauteous thing,
And he had pity for all piteous wrongs….
A lover of earth’s forest – of her hills,
And brother to her sunlight – to her rain –
Man, with a boy’s fresh wonder, He was great
With greatness all too simple to explain.
He was a dreamer and a poet, and brave
To face and hold what he alone found true.
He was a comrade of the old – a friend
To every little laughing child like you
And when across the peaceful English land,
Unhurt by war, the light is growing dim,
And you remember by your shadowed bed
All those – the brave – you must remember him.
And know it was for you who bear is name
And such as you that all his joy he gave –
His love of quiet fields, his youth, his life,
To win that heritage of peace you have.
T.P.C.W. was Theodore Percival Cameron Wilson, the poet’s brother, killed in action 1918.
This poem was included in the Anthology: “Valour and vision: poems of the war, 1914 –18 (Longmans Green, London, 1920), Edited by Jacqueline Theodora Trotter.
If anyone has any definite information about Marjorie and her WW1 service please get in touch.
Dr. Connie Ruzich, a former Fulbright Scholar in the UK, is now a University Professor at Robert Morris University, Sewickley, Pennsylvania, United States of America. She has edited a fantastic WW1 Anthology entitled “International Poetry of the First World War: An Anthology of Lost Voices” Editor Constance M. Ruzich (Bloomsbury Academic, 2020) 157.50$ https://www.bloomsbury.com/us/international-poetry-of-the-first-world-war-9781350106444/
Her marvellous WW1 poetry weblog is Behind their Lines - https://behindtheirlines.blogspot.com/
Posted by Lucy at 08:16

For ANZAC Day here are some poems.   Interestlying, Billjim – “one who’ll plug for two” – rather than ANZACS was the affectionate name the public had for Australian soldiers in World War I

What mean these great white ships at sea, ploughing their Eastward tack, /

Bearing their precious human freight, bringing the spent men back? /

They mean that Australia has been there, they mean she has played the game,

And her wonderful sons have won their share of everlasting fame.

It hangs on the wall, a trifle battered,

The wire is warped and the lining tattered.

And the leather inside shows speakingly how

It’s been wet with the sweat of a soldier’s brow.

Month after month, through that fierce campaign—

The bitterest fight that was fought in vain—

It was jammed on an Anzac’s lean, brown poll,

As he pierced his way to a glimpse of goal.

From the sniping shot to the cold-steel, clinch-

He got there each time by “Rafferty rules.”

Till a shell, with his name on, gave him a call—

And that is the tale of the cap on the wall,

But the sequel, though strange, is an equally true one—

Its owner, thank God, is now wearing a new one.

Anzac by Sylvia Hobday - I have not been able to find anything out about Sylvia.

There’s a Name we’ve learnt to know, and love –

We’ll n’er forget while Heaven’s above,

And the mountains stand, and waters move

The Name was wrought out of blood and fire,

Through sacrifice and in peril dire –

But the Glory rose Beyond and Higher

The Anzac Boys are our Empire’s breed.

They are few or words, but great of deed

And true descendants of Britain’s seed,

They sail’d ’neath Heaven, and found a Hell,

Where many a Hero fought and fell

As the great guns chim’d their booming knell

And some now rest by the changing seas,

By stony shores swept by gale and breeze –

While stars keep watch o’er the sleep of these –

O! Christ, in Thy Love, look down, and keep

The souls of the slain, in their long sleep,

Thy comfort bring to the Hearts that weep

The Name shall ring through the Ages long –

A mighty Paean of Epic Song

“Cobbers” by Jessie Pope
They were “cobbers,” that’s Anzac for chum.
But it means rather more than we mean –
A friendship that will not succumb,
Though distance or death intervene.
Adventure, success, and mishap
In boyhood they’d shared, so no wonder
They jumped at the chance of a scrap
And booked with the crowd from ”down under.”
In a narrow Gallipoli trench
They chanced upon glimpses of hell,
And a thirst there was nothing to quench
But a deluging downpour of shell;
Perpetual ridges they took,
They charged and they cursed and they shouted,
But nothing their recklessness shook
Till one of the “cobbers” got “outed.”
The other one came back at night,
Exhausted in body and brain,
And groped round the scene of the fight,
But sought for his “cobber” in vain.
His spirit was heavy with grief,
His outlook was sombre and blotted,
But his bayonet brought him relief
Next, morning— and that’s when he “got it.”
Scene: Midday,Victoria street,
An Anzac (in blue) on each side –
A coo-ee, wild, ringing, and sweet –
The taxicabs swerve and divide.
For traffic they don’t care a toss,
There, right in the middle, they’re meeting;
Stay, let’s draw a curtain across
Where the two long-lost “cobbers” are greeting.
Cicely Fox-Smnith was among the very first female poets of WW1 I researched for this commemorative exhibition project.
“Farewell to ANZAC” by Cicely Fox-Smith (1882 -  1954)
Oh, hump your swag and leave, lads, the ships are in the bay -
We've got our marching orders now, it's time to come away -
And a long good-bye to Anzac Beach - where blood has flowed in vain
For we're leaving it, leaving it, game to fight again!
But some there are will never quit this bleak and bloody shore -
And some that marched and fought with us will fight and march no more;
Their blood has bought till Judgment Day the slopes they stormed so well,
And we're leaving them, leaving them, sleeping where they fell.
(Leaving them, leaving them - the bravest and the best -
leaving them, leaving them, and maybe glad to rest!
We've done our best with yesterday, to-morrow's still our own -
But we're leaving them, leaving them, sleeping all alone!)
Ay, they are gone beyond it all, the praising and the blame,
And many a man may win renown, but none more fair a fame;
They showed the world Australia's lads knew well the way to die;
And we're leaving them, leaving them, quiet where they lie.
(Leaving them, leaving them, sleeping where they died;
Leaving them, leaving them, in their glory and their pride -
Round the sea and barren land, over them the sky,
Oh, We're leaving them, leaving them, quiet where they lie!)
Cicely Fox Smith
https://femalewarpoets.blogspot.com/search?q=Cicely+Fox+Smith

Re-issue of 'Patriot Mothers and other poems' by Evelyn Shillito 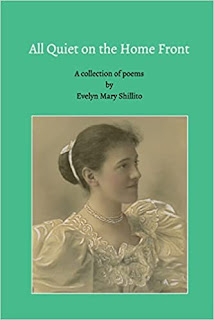 Great news!  The poems of Evelyn Shillito (1874 – 1924) have been re-issued.  For further information about Evelyn please see a previousw post on Female Poets of the First World War  http://femalewarpoets.blogspot.com/2022/02/evelyn-mary-shillito-nee-trengrouse.html

Evelyn’s poetry collection, entitled 'Patriot Mothers and other poems', was discovered in a family attic after a hundred years. This is a new 2022 edition of Evelyn’s book, originally published in 1925 by the "Surbiton Times", after her death in 1924. The original book was prefaced by the following note: “Evelyn might have wished to make some emendations in these verses if she had known that they would be printed, but it has been thought better to issue them just as they were left by her.” Evelyn's relative says: "It has been a privilege to review her poems and make just a few adjustments for readers to enjoy, 100 years later."

Here is the link to purchase a copy: