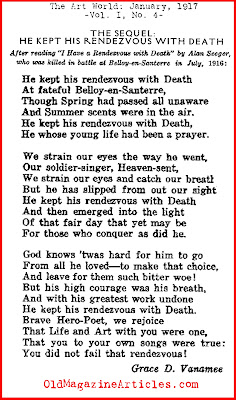 Grace graduated from Drury High School, North Adams in 1894 then attended Bliss Business College in 1895 before going to Emerson College Oratory, Boston, in 1899, where she followed a post-graduate course in 1900.

Grace then became a platform reader and lecturer and taught in private schools from 1901-1907. She was a lecturer in city schools in New York, and Brooklyn Institute Arts and Sciences, 1907-1909.  In 1909, Grace married lawyer William Vanamee, a widower who died in 1914.

During the First World War, Grace was Assistant to the chairman of the American Poets’ Ambulance Committee and secretary of the Italian War Relief Committee of New York.

Grace's poem "The Sequel - He kept his Rendezvous with Death" was first published in the magazine “The Art World” - January 1917, Volume 1, No. 4 – reproduced by kind permission of Matt Jacobsen, editor of the website www.oldmagazinearticles.com 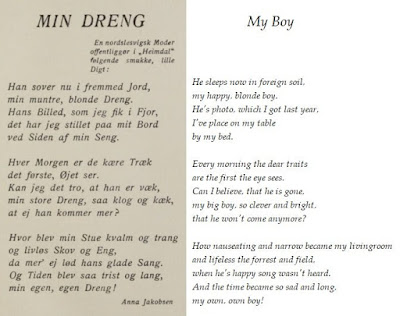 With grateful thanks to the wonderful Pike Grey on Twitter who not only found this poem for me but also translated it from the original Danish. Another WW1 Mother's anguish ...

From Pike Grey 1914-1918 @PikeGrey1418
·
"My Boy" a short Danish wartime poem written by Anna Jakobsen, a mother of a fallen soldier from the Danish minority in Schelswig who were compelled to fight in the German army.
I've translated is as close to the original as I could.