List of Female Poets of the First World War

I am currently going through my list and trying to add any poets I have so far missed.   You will find the list on the bar at the top of the page.

As always, if anyone knows of a poet not yet on the list please get in touch.   Thank you.

It is always a pleasure to receive e-mails regarding this project and I am very grateful to all the people who are helping me to track down lesser known poets of the First World War.

I have received the following reply from Nicolas Detering and would like to thank Nicolas and Martin for their help in finding more Germany female poets of the First World War.


"I have just finished a paper on Ina Seidel and Agnes Sapper, both of which are listed on your blog. The article will appear in a collected volume on Female War Poets from Germany, which is due to be published some time in early 2015.

Incidentally, the most successful German female war poets by far were Ina Seidel and Isolde Kurz, at least judging from the number of their poems in anthologies. "

I will be following up these leads and adding the poets to my ever growing list. I hope to report back to you shortly with details of the poets suggested by Nicolas, as well as details of the book he mentions.
Posted by Lucy at 13:09

To read a review of Volume 1 of  "Female Poets of the First World War" please follow the link
http://www.bestkeptsecrets.biz/2014/12/book-review-female-poets-of-first-world.html

I wondered why I'd been asked all those question.

Now - back to work on the list of poets, etc. 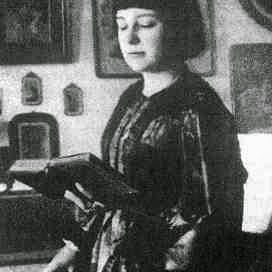 Marina was born in Moscow on 8th October 1892.  Her parents were Ivan Vladimirovich Tsvetaev, a university lecturer and Maria Alexandrovna Meyn, who was a concert pianist of Polish and German origin.  Marina had a privileged upbringing.

Marina’s mother, who was her husband’s second wife, became ill with TB and in 1902 the family began to travel hoping that her health would improve.  The family lived in Italy near Genoa for some time.  Marina was sent to boarding school in Lausanne in 1904 and her mother, who wanted Marina to become a concert pianist, insisted that she study music.   After her mother’s death in 1906, Marina at last felt she could concentrate on her poetry writing.  1908 Marina went to the Sorbonne in Paris to study the history of literature.   She published her first volume of poetry herself in 1910.

In 1912, Marina married Sergei Yakovlevich Efron, an officer in the Russian Army. The same year, Marina’s Father’s project The Pushkin Museum of Fine Arts was opened. The opening ceremony of the museum was attended by Tsar Nicholas II.  Until the Russian Revolution, the couple used to travel to The Crimea every summer.

Sergei went to fight on the Russian Front in 1914.   In 1917 he joined the White Army and Marina went to Moscow.  There was a famine in Moscow after the  Revolution and Marina’s health suffered and her daughter Irina starved to death.

In 1922, Marina and her daughter Ariadna, who had survived the famine, went to Berlin where they were reunited with Efron who Marina was convinced had been killed by the Bolsheviks.  In 1923, she began to correspond with Rainer Maria Riike.   The family moved to Prague and in 1925 to Paris.   Marina continued with her writing.   In 1939, the family returned to Moscow.  Her husband and daughter were arrested on spying charged and her husband was shot.

Marina died in Yelabuga on 31st August 1941.  Russian composer Dmitri Shostakovich set some of Marina’s poems to music and in 2003 an opera about her was performed in New York – “Marina:  A Captive Spirit.”

Here is a translation of one of Marina's poems:

I Know the Truth

This truth I know – all other truths must cease
Our useless struggle no longer can appease.
For it is evening and the earth by night will soon be covered
What are you discussing?  Poets? Generals?  Lovers?

The wind has softened and the earth is damp with dew
The galaxy of stars above will soon be but a few
And together we beneath the earth will slumber -
We, who gave no others peace but constant thunder.