With thanks to Historian Debbie Cameron for sending me the

poem that set me off researching Isobel Wylie Hutchison

Isobel Wylie Hutchison was born in Kirkliston, Linlithgowshire (West Lothian), Scotland, on 30th May 1889.   Her parents were Thomas Hutchison, who had been a merchant with the East India Company, and his wife, Jeannie, nee Wylie. The family home was Carlowrie Castle, Kirkliston, Linlithgowshire (West Lothian), Scotland.   Isobel began writing at an early age, kept diaries from 1903, and edited "The Scribbler", a magazine created by the family. Isobel learnt Italian, Gaelic, Greek, Hebrew, Danish, Icelandic, Greenlandic and also learnt some Inuit words.

Isobel's youngest brother, Frank, (Francis J. b. 1897) died in 1912 at the age of 16 in a climbing accident in the Cairngorms and his loss affected her deeply. Another brother, Thomas Walter, (b. 1886) was killed in the First World War.

From 1917 to 1918, Hutchison studied business training, marketing, religion and languages, at Studley College in Warwickshire, which had been set up for the education of young women in agriculture. During 1918, things were very bad, with little food for the animals and all the men gone to the war. Influenza swept through the college and some students died. 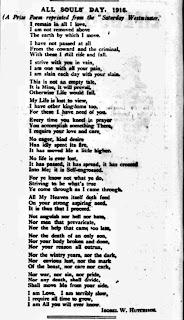 In 1920, Isobel suffered a mental breakdown but was sustained by her continued success with her writing - her poetry was acclaimed by “The Scotsman” newspaper and she began writing a novel.  She began travelling in 1924 and painted many scenes from her adventures, visiting the Arctic, apan, China, Trans-Siberian Railway, Moscow, Poland, Berlin, Estonia and Denmark.

After the Second World War, Isobel gave talks on the radio for the British Broadcasting Company (BBC). Carlowrie Castle was very run down after the war, having been used by the Royal Air Force (RAF) and Isolbel needed to continue working in order to pay for repairs and maintenance. Electricity was only installed there in 1951.

In later life Isobel suffered from Arthritis, but this did not stop her working.  She died at Carlowrie Cast;e in 1982, aged 92 and is buried in the northern cemetery in Kirkliston, along with her sister, Hilda Scott Primrose Hutchison (b. 1892).

Isobel’s WW1 poetry collection, “Lyrics from West Lothian” (Pillans & Wilson, 1916), was privately p rinted and sold in aid of the Red Cross Fund and she had a poem published in "A book of twentieth-century Scots verse" Edited by William Robb and published by Gowans & Gray in 1925.

Her other poetry collections were:

How Joy was found: A Fantasy in Verse in Five Acts. London: Blackie; New York: Frederick A. Stokes, 1917

Other works by Isobel Wylie Hutchison:

Flowers and Farming in Greenland. Edinburgh: T. A. Constable, 1930

On Greenland’s Closed Shore: The Fairyland of the Arctic. Edinburgh: William Blackwood, 1930

She had articles published in  the WNational Geographic" magazine:

"Riddle of the Aleutians", December 1942

"From Barra to Butt in the Hebrides", October 1954

Isobel had several other articles published in many journals and newspapers. and gave more than 500 lectures during the course of her life. The plants she collected during travels are in Kew Gardens, the Royal Botanic Gardens in Edinburgh and the British Museum. Some of the artefacts she collected are on display in the National Museum of Scotland and the Scott Polar Research Institute (University of Cambridge).

Poem from “The Westminster Gazette” 3 November 1916

"The Westminster Gazette" was a Liberal newspaper based in London, founded in 1893. It was known for publishing sketches and short stories, including early works by Raymond Chandler, Anthony Hope, D. H. Lawrence, Katherine Mansfield, and Saki, and travel writing by Rupert Brooke. One of its editors was caricaturist and political cartoonist Francis Carruthers Gould. The paper was dubbed the "pea-green incorruptible" – Prime Minister William Ewart Gladstone having personally approved its green colour. It was merged into its leading Liberal rival, The Daily News on 1 February 1928.