Catherine posted this on her Facebook page Rupert Brooke Remembered: “The poet Rupert Chawner Brooke was staying at Cley on the Norfolk coast when he heard of the outbreak of war. Frances Cornford was with him at the time and wrote:

‘A young Apollo, golden-haired,
Stands dreaming on the verge of strife,
Magnificently unprepared
For the long littleness of life’.

He reputedly did not speak for a day until Frances Cornford asked: ‘But Rupert, you won’t have to fight?’ to which he replied ‘We shall all have to fight’.”

Frances was born on 30th March 1886. Her parents were the botanist Francis Darwin and his wife, Newnham College fellow Ellen Wordsworth Crofts.  Frances was a granddaughter of the British naturalist Charles Darwin. Brought up in Cambridge, Frances was educated privately.

In 1909, Frances Darwin married Francis Cornford, a classicist and poet. The couple had five children.

Frances’s husband, Francis Cornford, was cremated at Cambridge Crematorium on 6th January 1943.
Frances died on 19th August 1960 and is buried at the Parish of the Ascension Burial Ground in Cambridge, in the same grave as her father Sir Francis Darwin. Her mother Ellen Wordsworth Darwin, née Crofts, is buried in St. Andrews Church's churchyard in Girton, Cambridgeshire. 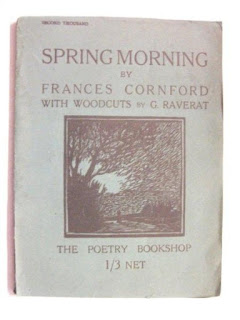 “AT NIGHT” by Frances Cornford

On moony nights the dogs bark shrill
Down the valley and up the hill.

There's one is angry to behold
The moon so unafraid and cold,
Who makes the earth as bright as day,
But yet unhappy, dead, and gray.

Another in his strawy lair
Says : " Who's a-howling over there ?
By heavens I will stop him soon
From interfering with the moon."

So back he barks, with throat upthrown
" You leave our moon, our moon alone."
And other distant dogs respond
Beyond the fields, beyond, beyond.

From “Spring Morning” with woodcuts by her cousin Gwen Raverat published by the Poetry Bookshop, London, 1918 – p. 24.
An interesting aside - while researching The Reverend Basil Pemberton Plumptre for my feature on Poets, Writers, Artists and Chaplains who were awarded medals for exceptional bravery during WW1, I discovered a link to Frances Cornford.  According to the 1891 Census, the Plumptre family lived in the Vicarage in Woodham Ferris, Eastwood, Nottinghamshire, where The Rev. Charles Plumptre was Rector.   The census records a visit at that time by Clara’s sister – Mary E. Cornford - with her son Francis M. Cornford, who was born in Eastbourne, Sussex in 1874.   Which means that Frances Cornford was a cousin by marriage to Basil Plumptre.

Sources:
Find my Past, Free BMD,