Exciting News from the May Sinclair Society! 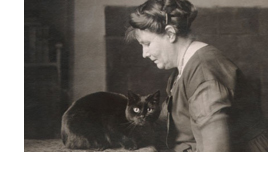 Exciting news regarding May Sinclair, who was one of the most important and famous writers at the time of WW1 on both sides of the Atlantic.  May helped to fund, and accompanied, Dr. Hector Munro’s Flying Ambulance Unit to France in September 1914.  She stayed to help out for six weeks before returning to Britain to write about her experiences.  May Sinclair was the first poet I researched for the exhibition of Female Poets of the First World War at the Wilfred Owen Story Museum in Argyle Street, Birkenhead, Wirral, UK.  May is also one of the poets featured in Volume 1 of Female Poets of the First World War, available from http://www.poshupnorth.com/2013/08/new-title-female-poets-of-first-world.html - also available as a download.


From: Dr Rebecca Bowler (Keele University), Dr Claire Drewery (Sheffield Hallam), and Suzanne Raitt (William & Mary College)
“We received some exciting news yesterday: our proposal for a series of critical editions of May Sinclair's works has been approved by Edinburgh University Press!


The Edinburgh Critical Editions of the Works of May Sinclair will publish Sinclair’s collected prose works: twenty-one novels, six short story collections (bundled in two volumes of ‘shorter fiction’), two volumes of philosophy, one biography (of the Brontë sisters) and one memoir (of the First World War). There will also be one volume of Sinclair’s collected non-fiction, including The Way of Sublimation. Non-fiction and fiction will appear side by side so that the dialogues between each can be explored. Rebecca Bowler, Claire Drewery and Suzanne Raitt are the General Editors.


May Sinclair was an innovative and influential Modernist writer, and these critical editions will, we hope, attract further scholarship on her writings and revive interest in Sinclair as an important modernist writer and public intellectual.


We will be in touch in the New Year with a call for expressions of interest from scholars who wish to edit individual volumes.” 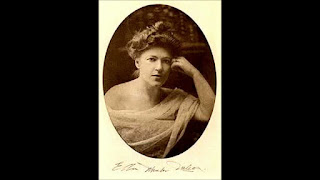 The Poetess of Passion

Ella Wheeler was born on 5th November 1850 in Johnstown, Wisconsin, USA.  Soon after her birth, the family moved to Madison.  Ella began writing poetry at an early age, and became known as "The Poetess of Passion".

You may have heard the line “Laugh and the world laughs with you” which is from Ella’s poem “Solitude”, first published in “The New York Sun” in 1898.   “Ella Wheeler Wilcox was probably the most widely read poet of the day”, selling 100,000 copies of her poetry collection entitled “One Hundred Poems” in the early years of the twentieth century (Hollis, 40).

When planning his trip to America, Rupert Brooke suggested he might take a “message for the continent of America and for Ella Wheeler” (Hollis, 67).

Ella m arried Robert Wilcox of Meriden, Connecticut in 1884.  They travelled extensively throughout Europe and Asia.  Ella's husband died in 1916.


Ella travelled to France after America entered the First World War in order to read poetry to the American Troops - quite an unertaking for a woman of 67.  They were very pleased to see her and really appreciated her performances. Ella wrote poems for the troops while she was in France and published them in a volume entitled "Hello, Boys".

During her lifetime, Ella wrote and pulished more than 70 books, wrote thousands of poems and also wrote plays and magazine articles.

Ella died on 30th October 1919.  In spite of her fame, Ella Wheeler Wilcox is now one of the ‘forgotten’ poets of the First World War.

There is something in the sound of drum and fife
That stirs all the savage instincts into life.

In the old times of peace we went our ways,
Through proper days
Of little joys and tasks. Lonely at times,
When from the steeple sounded wedding chimes,
Telling to all the world some maid was wife—
But taking patiently our part in life
As it was portioned us by Church and State,
Believing it our fate.
Our thoughts all chaste
Held yet a secret wish to love and mate
Ere youth and virtue should go quite to waste.
But men we criticised for lack of strength,
And kept them at arm's length.
Then the war came—
The world was all aflame!
The men we had thought dull and void of power
Were heroes in an hour.
He who had seemed a slave to petty greed
Showed masterful in that great time of need.
He who had plotted for his neighbour's pelf,
Now for his fellows offers up himself.
And we were only women, forced by war
To sacrifice the things worth living for.

When we heard the sound of drumming,
As our soldiers went to camp,
Heard them tramp, tramp, tramp;
As we watched to see them coming,
And they looked at us and smiled
(Yes, looked back at us and smiled),
As they filed along by hillock and by hollow,
Then our hearts were so beguiled
That, for many and many a day,
We dreamed we heard them say,
'Oh, follow, follow, follow!'
And the distant, rolling drum
Called us 'Come, come, come!'
Till our virtue seemed a thing to give away.

War had swept ten thousand years away from earth.
We were primal once again.
There were males, not modern men;
We were females meant to bring their sons to birth.
And we could not wait for any formal rite,
We could hear them calling to us, 'Come to-night;
For to-morrow, at the dawn,
We move on!'
And the drum
Bellowed, 'Come, come, come!'
And the fife
Whistled, 'Life, life, life!'

So they moved on and fought and bled and died;
Honoured and mourned, they are the nation's pride.
We fought our battles, too, but with the tide
Of our red blood, we gave the world new lives.
Because we were not wives
We are dishonoured. Is it noble, then,
To break God's laws only by killing men
To save one's country from destruction?
We took no man's life but gave our chastity,
And sinned the ancient sin
To plant young trees and fill felled forests in.

Oh, clergy of the land,
Bible in hand,
All reverently you stand,
On holy thoughts intent
While barren wives receive the sacrament!
Had you the open visions you could see
Phantoms of infants murdered in the womb,
Who never knew a cradle or a tomb,
Hovering about these wives accusingly.

Bestow the sacrament! Their sins are not well known—
Ours to the four winds of the earth are blown.

Ella features in Volume 1 of Female Poets of the First World War available from www.poshupnorth.com 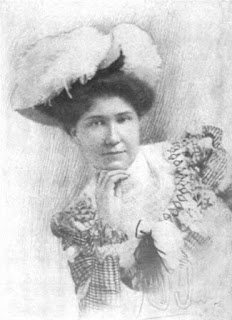 May Sinclair Letter to the publisher John Lane

Exciting news from the May Sinclair Society about a letter discovered recently tucked away in one of May Sinclair's books.

It seems that May was very much a part of the London literary scene during the time of the First World War.  "Theophilus Boll places her at a party Lane gave in 1914 to launch Wyndham Lewis’s Blast! (‘May Sinclair enjoyed herself hugely with Ivor Brown at the dinner that John Lane gave on July 15, 1914, at the Dieudonné Restaurant in Ryder Street, St. James, to set off the Blast!’). Ivor Brown said of this ‘I don’t know how far M.S. was impressed, but at that period she liked to go about and be in the midst of literary goings-on’." 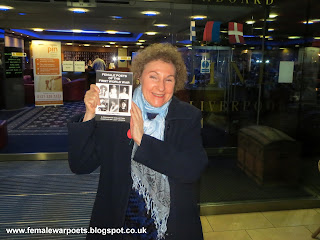