Exhibition of Poetry written by Schoolchildren during the First World War 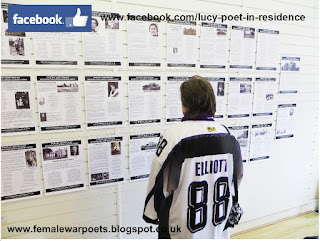 My latest exhibition, which features Poetry Written by Schoolchildren in the UK during the First World War, is now on display at The Wilfred Owen Story in Argyle Street, Birkenhead, Wirral, UK.  The exhibition was opened on 17th March 2018 (the day before Wilfred Owen's birthday) and a bust of Wilfred Owen sculpted by Anthony Padgett was unveiled on the same day by local MP Frank Field.  Here is a link to a BBC North West Tonight news report of the event: https://www.youtube.com/watch?v=78b40hAbqb8

Among the poets featured are the girl who went on to use the pen-name Temple Lane, the daughter of poet E.V. Lucas and the future wife of Geoffrey Faber who founded the publishing company Faber & Faber because she did not like the smell of the Faber family brewery.

Entry is free and the WOS is open from Tuesdays to Fridays from 12 noon until 2 pm (winter opening times) but it is advisable to phone first as the museum is manned by volunteers - 07903 337995.
The Wilfred Owen Story,
34 Argyle Street,
Birkenhead, Wirral, UK,
CH41 6AE
http://www.wilfredowenstory.com/
Panels from previous exhibitions held at the WOS, including that featuring some of the poets involved in the Battles of Messines (Mesen), Passchendaele and after in 1917, Poets of the Battle of Arras in 1917, Poets of the Somme 1916, Female Poets of the First World War, Inspirational Women of World War One and Fascinating Facts of the Great War, are available to view on file at The Wilfred Owen Story.  Other exhibitions are planned.

Photo of the exhibition panels taken by Paul Breeze of www.poshupnorth.com 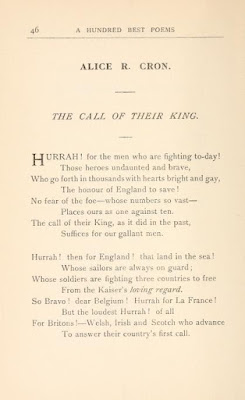 
In 1880, Alice married a German national called James Philip Cron, a glove manufacturer.   In 1891 they lived in Heathland Road, Stoke Newington and in 1911 they lived in Amhurst Park, Stamford Hill, Hackney.


I would love to know more about Alice.  As she is described as a writer and poet on her headstone, I would love to find other poems written by Alice and to find a photograph of her. If anyone can help, please get in touch.

Alice’s poem (see left) “The Call of their King“ was published on page 46 of “One Hundred of the Best Poems on the European War, Volume 2 By women poets of the Empire“, edited by Charles Frederick Forshaw and published by Elliot Stock in 1916.  This WW1 anthology is available to read as a free down-load on Archive: 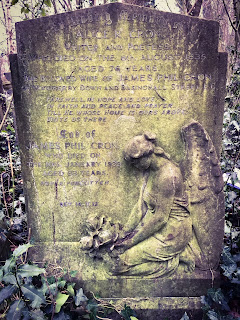 With grateful thanks to Marina Szijanto for reminding me that I had not yet researched Alice and for sending me the beautiful photograph of Alice’s headstone, which she recently visited.
Posted by Lucy at 04:51

A book about WW1 poet Millicent, Duchess of Sutherland - "The Hospital in the Oatfield: The Art of Nursing in the First World War 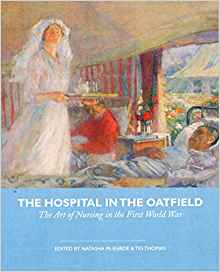 “The Hospital in the Oatfield:  The Art of Nursing in the First World War” Edited by Natasha McEnroe and Tig Thomas, published by The Florence Nightingale Museum, London, 2014. £7.99 from the Museum Shop.


“A physician gives his blessing, the surgeon does the operation.  But it is the nurse who does the work.”  Henry Souttar, Surgeon
In 1915, French artist Victor Tardieu painted some of the scenes at the Hospital in the Oatfield, organised by Millicent, Duchess of Sutherland in France in the early days of WW1. I found out about those paintings while researching women poets of the First World War for an exhibition in November 2012 – Millicent was among the first poets I researched.   The paintings were on display for sale at an auction house in London, so I was very pleased to learn that the Florence Nightingale Museum in London had purchased them.


I was even more delighted to find out that there is a book about the paintings – this is indeed good news for those unable to visit the Museum.  In this beautiful book, you will find a chapter about Victor Tardieu, as well as lovely colour prints of his paintings.


But this is not just a book about Tardieu’s paintings, or about Millicent Sutherland. Natasha McEnroe and Tig Thomas have done a brilliant and meticulous job of editing the eight guest-written chapters and ensuring continuity.  These articles are interspersed with brief quotes taken from diaries and records kept by nurses Olive Dent and Enid Bagnold at the time of WW1, together with some amazing black and white photographs, a large number of which were taken by Dr. Oswald Gayer Morgan who worked with the Duchess of Sutherland.


The book begins with a Foreword by Millicent’s grand-daughter, Elizabeth Millicent, Countess of Sutherland.  Chapter 1, by Simon Chaplin and Natasha McEnroe, is about the Duchess and includes contributions from relatives of two of the doctors who worked with Millicent.  Chapter 2, by Emily Mayhew is about the nurses of WW1.  Chapter 3, about voluntary and professional nursing in WW1, is by the late Sue Light, whose website Scarlet Finders is a wonderful reminder of her work.  Chapter 4, by Eric von Arni, explains the work of The Queen Alexandra’s Imperial Military Nursing Service, while Chapter 5, by, Christine Hallett, is entitled “The Traumas of Conflict”.  Chapter 6,, by Danuta Kneebone, is about Tardieu and his paintings and Chapter 7, “The Stylish Nurse 1914 – 1918” by Frederic A. Shaarf and Jill Carey, tells us about some of the American nurses of WW1, what they wore and where the sourced their uniforms and leisure wear.


The final chapter of the book, “All the Living and all the Dead” by Holly Carter-Chappell, Collections Assistant at the Florence Nightingale Museum, describes the Victorian and Edwardian ways of mourning which changed dramatically during the war to end all wars and touches upon the collective mourning experienced in Britain that continues to this day, especially for those of us who have relatives killed in the conflict who have no known grave.


I found a lot of very interesting information in the book and it is hard to pick out just a few items for the purpose of this review.  A photograph of a nurse washing her hair using a bowl on page 19, answered a question I have asked for a long time.  I wondered how on earth the nurses managed to keep clean with their long skirts and long hair in the truly awful conditions they worked and lived in.  A photograph of the dismantling of the Hospital in the Oatfield in the autumn of 1915 on page 23 is also fascinating.


I was particularly interested in a detailed explanation of gas gangrene on page 8, followed by the Carrel-Dakin method of wound irrigation. There is a photograph of the system on page 9.


It is also interesting to read about the recreational activities of the nurses, who worked very long hours in such difficult conditions but shocking to read of the number of nurses killed or drowned by enemy action during the war.


The last, very positive word, goes to Olive Dent, one of the WW1 nurses quoted in the book, which I feel is very fitting.


With an Epilogue, Bibliography and brief biographies of contributors, this is a book you will want to refer to again and again and it is a fitting tribute to the wonderful women who nursed during the First World War.  When you compare the standards, facilities and medication of the 21st Century with what was available in the early days of the 20th Century, their work, the number of lives they saved against all odds and their dedication and good humour in the most awful conditions, becomes all the more remarkable.
Posted by Lucy at 07:43 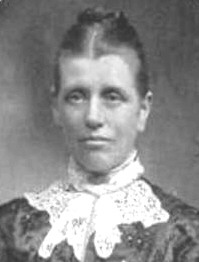 It is always exciting to discover a hitherto unknown poet and, thanks to a dear friend in America, here is another.


Educated at home, Emily demonstrated an aptitude for writing poetry and had her work published in local newspapers.  Her poetry collection “Winter Flowers and Other Verses” was published in 1932 and includes several poems about the First World War.


Russell Markland included an example of Emily’s work in his anthology “Staffordshire Poets” (1928), which was co-edited by Charles Henry Poole.


My grateful thanks to Mark for sending me this information about Emily. I am now looking for some of her poems.
Posted by Lucy at 07:35

With sincere  thanks to Lynne Sidaway for sending me this poem from "The Times Despatch", Richmond, Virginia, USA of 2nd September 1917. Lynne tells me that the poem seems to have been entered into a competition organised by the newspaper:

"A Poem" by Emma Wright Brown

A soldier lay dying on the battlefield:
He had been shot by a German soldier,
A Red Cross nurse by him kneeled,
To see what was the matter.

He is dying” she said. “Oh , what shall I do,
“He will die if he stays here much longer”
A moment more she thought she knew
The poor dying soldier.

Again she looked into his face;
So peaceful and calm he lay.
She asked the Lord to give her grace
To save him another day.

She did not recognize him to be
Her only beloved brother
Who had been stolen away so long ago
From his poor old darling mother.

At once she noticed a scar on his leg
That was made during his childhood:
She knew now he must be her brother
So calm and peaceful and good.

The rain now began to fall
While mournings filled the air
Then he gave up!
And his last words were
Tell Mother I’ll be there.”