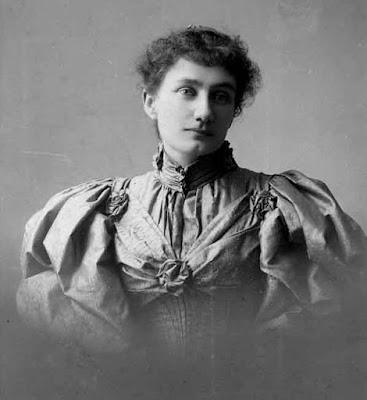 I find it very exciting to discover a WW1 female poet I have not heard of  and Ella Rhodes Higginson falls into that category.

With grateful thanks to Marielle Stockton, Research Specialist in the Library of American Western Washington University in Bellingham, Washington, USA, for her posts on Twitter, that led to the discovery of Ella Higginson and to an exchange of e-mails, to Dr. Laura Laffrado, Professor of English at Western Washington University and the Director of the Ella Higginson Recovery Project and to Debbie Cameron for reminding me to look at Twitter.

Ella was born in Kansas, the youngest of six children. Her parents were Charles Reeve Rhoads and his wife, Mary A. Rhoads.  Ella began writing poetry at an early age and had one of her poems – “Dreams of the Past” -  published in  “The Oregon City” newspaper in 1875.

During the First World War, Ella was a volunteer with the Bellingham Branchy of the American Red Cross and received the Red Cross Medal for her service.

“Song of the Evergreen Pine” is a poem that the Washington State Federation of Women’s Clubs asked Higginson to write for their 1915 convention. This poem appears in Ella Higginson: A Tribute, a slim volume published after her death in 1940 in which she selected many of the poems that would appear in it. This poem appears in no other books of Higginson’s.

The rivers to the ocean flow,
The sunsets burn and flee,
The stars come to the darkling sky,
The violets to the lea;
But I stay in one lone sweet place
And dream of the blue sea.

The harebell blooms and is away,
The salmon spawns and dies;
The oriole nests and is on the wing,
Calling her sweet good-bys;
But I, when blossoms and fruit are gone,
Yearn, steadfast to the skies.

I am a prayer and a praise,
A sermon and a song;
My leaf-chords thrill at the wind’s will
To nocturnes deep and strong;
Or to the sea’s far lyric melodies
They echo and prolong

When April flashing up the hill
Freshens my green attire,
I light my candle tall and pale
With holy scarlet fire—
And straight their incense mounts to God,
Pure as a soul’s desire.

My branches poise upon the air,
Like soft and living wings;
My trembling leaves the wind awakes
To a harp of emerald strings—
Or through the violet silences
A golden vesper sings.

I am a symbol and a sign . . .
Thro’ blue or rose or gray;
Thro’ rain and dark; thro’ storms of night,
Thro’ opaline lights of day—
Slowly and patiently up to God
I make my beautiful way.

“For Honor and for God” was printed on the front page of the Bellingham Herald on September 18, 1917. It was also published in a handbook of the Bellingham State Normal School, one of the state colleges for training teachers. This poem appears in no books of Higginson’s.

America, stand up! The time has come
To blow shrill bugle-calls throughout this land.
Drop the white flag of peace from they're firm hand,
And bid the long, wild rattle of the drum
Quicken the blood of men from shore to shore.
Nations, on our swords gathered is no rust!
Peace if it may be; red war if it must!
For we love peace—but we love honor more.


Fling out again o’er every battle-ship
That old white flag with the inspired device—
The pine-tree springing from the lowly sod
Thrilled big with prayer to its trembling tip!
Then will the old fire melt these veins of ice,
And we will fight—for honor and for God!

“God Has Not Spoken Yet” appears in the American Reveille in April of 1910, but in Ella Higginson: A Tribute the poem is reprinted and there it says that it was written in April of 1918. I believe that the poem was perhaps revised by Higginson and printed in a newspaper or periodical in 1918. This poem appears in no other books of Higginson’s.

God has not spoken yet!
The world’s dread horror struggles to its close;
Where France’s slopes today with blood are wet,
Next year will bloom the lily and the rose.

God has not spoken yet!
But when God speaks—whose side will God be on?
Will he the Invaders’ crimes forget,
Give night and shame, or Liberty and dawn?

[under poem in type: “(Hohenzollern changed to Invaders.)—E. H.”]