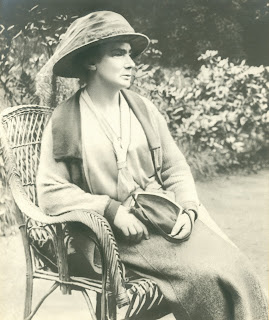 With thanks to https://twitter.com/GirvansFallen on Twitter for reminding me that I had not yet researched Mary Symon, who is on my List of Female Poets of the First World War.

Mary was born on 25th September 1863 in Dufftown, Moray in Banffshire, Scotland. Dufftown is in the ancient parish of Mortlach.  Her parents were John Symon, a Saddler and Merchant who was a Provost of Dufftown, and his wife, Isabella Symon, nee Duncan.  Mary had a younger sister, Elizabeth, who was born in 1866.


Mary began writing poetry at an early age. She was educated locally at Mortlach Public School, then attended the Edinburgh Institute for Young Ladies. She attended classes at Edinburgh University and graduated from St. Andrew’s University .


For an article by Leanne Welsh about Mary’s poem "The Soldiers' Cairn", please see:  http://www.westscotlandrce.co.uk/the-soldiers-cairn.html


“The Soldiers' Cairn” by Mary Symon


An' a reid sun drappin' doon,


Or the mists o' the mornin' risin' saft


Gie me a howe by the lang Glen road,


For it's there 'mang the whin and fern


Far awa’ is the Flanders land


But mony a howe o' them baith the day


Has a hap o' the Gordon green.


It's them we kent that's lyin' there,


I'll read on the Soldiers' Cairn.


Till it leaps to the moorland sky —


More, more than death is symbolled there,


Than tears or triumphs by.


There's the Dream Divine of a starward way


Our laggard feet would learn—


As we fashion the Soldiers' Cairn.

Lads in your plaidies lyin' still


To me fae the Soldiers' Cairn. 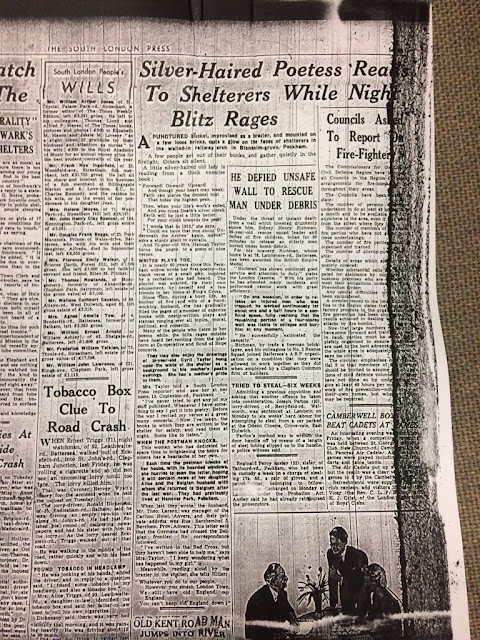 Meanwhile, over on Twitter, BlitzDetective has found me a WW1 female poet who entertained people sheltering in air raid shelters during the WW2 Blitz by reading her poems to them.  I am hoping to enlarge upon this find.

My grateful thanks to BlitzDetective for contacting me with such an amazing find:
Hannah Sarah Lawson was born on 21st June 1867 in Camberwell, London, UK.  Her mother was nee Barnett.  In 1889, Hannah married John Harry Taylor and they had two children – Cyril, born 17th July 1902, and Alice.


During the Second World War, in an air raid shelter in Blenheim Grove, Peckham, UK, a make-shift brazier gave out warmth and light.  A few people got out of their bunks and gather quietly in the firelight.  A little silver-haired old lady was reading from a thick exercise book:


“Forward, onward, upward and though your heart may break,


Faith can pierce the densest mist that hides the highest peak.


Then when your life’s work’s ended, and you cross death’s silver streak


Earth will be just a little better for your climb towards the peak.”


“I wrote that in 1914”, said 73 year old Mrs Hannah Taylor in a report in the “South London Press” newspaper during WW2:


It’s nearly 60 years since this Peckham widow wrote her first poetry – it was blank verse - a small play inspired by a recitation she had heard.  The playlette is enacted for their own amusement by herself and a few friends in her home at King’s Cross.  Since then, during a busy life, as mother of five and wife of a hard-working husband, she has gradually filled the pages of a number of exercise books with neatly written plays and stanzas, ranging over all topics – moral, political and romantic.  Many of the people who listen to her poems while the Blitz rages outside, have heard her reciting from the platform at Co-operative and Band of Hope concerts.
They may also enjoy the drawings of 38-year old Cyril Taylor hung up on the walls of the air raid shelter as a background to his mother’s poetic evening.   She has a mother’s pride in them.
Mrs Taylor told a “South London Press” reporter who saw her at her home in Copleston Road, Peckham – she said “I have never tried to get any of my stuff published.  Whenever I have something to say, I put it into poetry.  Before the war, I recited my verses at a great many concerts.  Now I have taken the books in which they are written to a shelter for safety and read them at night as some like to listen.”

This woman who has dedicated her spare time to brightening the hours for others has a heart-ache of her own.  Each time the postman knocks at her house with its boarded windows, she hurries to scan the letter hoping it will contain news of her daughter, Alice and the Belgian husband with whom she returned to Belgium after the last war.  They had previously lived at Hannover Park, Peckham.  When they last wrote, the husband, Mr Theo Larsen, was Manager of the Carleton Hotel, Antwerp and their private address was Rue Berchemhoff, no. 5, Berchem, Province of Antwerp.  This letter said that the Germans had crossed the Belgian frontier.  No correspondence had followed.

“I have written to the Red Cross but they haven’t been able to help me”, says Mrs Taylor. “I keep wondering what has happened to my girl.”  Meanwhile, reading aloud by the brazier in the shelter, she tells Hitler
“Whatever you do to our people, however you smash London Town,
We still have Old England, our England, You can’t keep Old England down.”