Georgina was born on 2nd March 1855 in Cork, Ireland.  Her parents were Alfred Greer and Peggy Bowen-Colthurst.

She married Robert Walter Travers Bowen-Colthurst on 15th August 1872 and the couple had four children:  Mary, John, Peggy and Robert.   They lived at Oakgrove and Dripsey Castle in Carrignamuck, Co. Cork, Ireland.

Georgina's WW1 Collection 'It is for Man to choose' was published by Elkin Mathews in 1920.  It was dedicated to the memory of her son, Robert Macgregor, who was born in 1883.  He was a Captain in the 1st Battalion Leinster Regiment and was killed in action on The Western Front.  The inscription read: 'To my grandson, Patrick, in memory of his dearly-loved father, killed at St. Eloi, 15th March 1915, in the World War.'

Captain Bowen-Colthurst is commemorated on the Ypres (Menin Gate) Memorial in France. 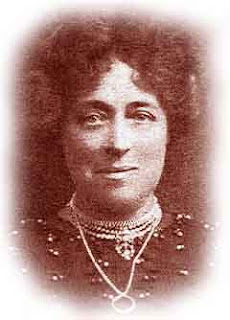 
Eva began writing seriously at the age of fourteen and had some of her work published.  She wrote novels, short stories, a play, poems and contributed articles to newspapers.


In 1889, Eva married Henry Anstruther and the couple had a son and a daughter.  They separated later and were divorced in 1915.


When the Camps Library – a scheme for providing Allied Prisoners of War with books during WW1– was set up on 1st October 1914, Eva was appointed Honorary Director of the organisation.   As she had many contacts among important people of the literary world at the time, Eva was able to make arrangements with certain publishing companies whereby stocks of their unsold books were made available to Camps Library free of charge.
For her work as Director of the Camps Library, Eva was made a Dame Commander of the Order of the British Empire in 1918.

Although this poem was not written during the period of the First World War, it has a very powerful message that is still valid today.   As Shushan Avagyan has kindly sent me her translations of several poems written by Shushanik Kurghinian, I thought I would share some of them with you.

I Want to Live

I want to live, but not a lavish life


nor an outright hostage of beauty aids


as a frail creature, delicate and feeble


but equal to you, oh men, prosperous


as you are powerful and headstrong,


fit against calamities, ingenious in mind


and bodies full of fervor.

I want to love, unreserved, without a mask


I can sing my feelings to the world


and unchain my heart a woman’s heart


before the crowds . . . ignoring their stern


judgements with my shield and destroy


their prickly arrows aimed at me


with all my vigor unrestrained!

I want to act, equal, next to you,


as a loyal member of the people,


let me suffer over and again, night or day,


wandering from one place to another,


always struggling for the ideal


torment me even in my exile


only to gain a purpose in this life.

I want to eat, comfortably as you do,


from that same fair bread, for which


in the struggle for existence, humble and meek,


without feeling humiliated, let me


shed sweat-and-tears for a blessed earning,


and let my back tire in pain!

I want to fight, first as your rival,


standing against you with an old vengeance,


that absurdly and without mercy you


turned me into a vassal through love and force.


Then after clearing these issues of my sex


I want to fight against the agonies of life

I received a wonderful e-mail recently from Shushan Avagyan (b. 1976), a translator and lecturer in the College of Humanities and Social Sciences at the American University of Armenia.  Shushan sent me a wealth of very interesting information that she has written about one of the poets on my List - Armenian poet Shushanik Popoljian Kurghinian - together with other biographical notes and photographs of the poet. 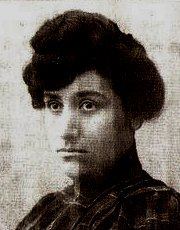 
Shushanik married Arshak Kurghinian.  In 1903 she travelled alone to Russia where she joined a clandestine workers’ movement in Rostov-on-Don.   Her first collection of poetry was published in 1907.   Shushanik’s poetry speaks for the under-privileged – especially women – and is a rallying call for the poor and oppressed.


Shushanik’s husband died in 1917.  In 1921 she returned to Armenia where she became ill and died in 1927.   Her daughter compiled and published Shushan’s poetry in several collections.


Shushan sent me several of her translations of Shushanik’s poems – here is one of them.

With old and tattered clothes,


with beautiful eyes of azure


the child of great anguish is she,

who wears a dishonored smile upon


from the early experienced lust.

To the crowded market full of people


she comes pale, lifeless and hungry

¾Take me, for the price of a slice


of bread or a glass of wine,


she sobs out loud.


my soul, ravaged and forlorn,


my heart¾all for a shameless sale!


come and I will ease your pain,


release you from shame.

And she cursed me obscenely, laughing,


¾You think you are purer than me? 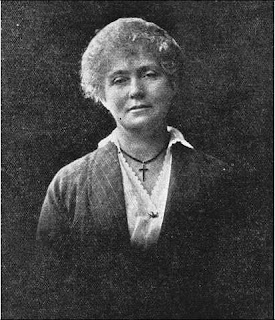 
On 16th June 1891, Alexandrine married Clarendon James Seager, a widower and British Army Officer.  In 1908, by which time they had six children, the family moved to live in Adelaide.   There, Alexandrine started up a business called The Scholastic Agency that found governesses and servants for outlying farms and cattle stations.
The three Seager boys joined the Australian Imperial Force in 1914 and following a visit to one of them, Alexandrine began a campaign to persuade the women of Australia to support the war and the Cheer-Up Society came into being.  Women volunteers visited military camps and hospitals, arranging concerts, lunches and special farewell ceremonies for the troops.   They also organised parcels to send to the troops.

Alexandrine also started a campaign to have the Violet adopted as the flower of remembrance in Australia and the very first Violet Day was held on 2nd July 1915.


From 1915 onwards, the Cheer-up Society organised refreshments for soldiers in a marquee behind the railway station in Adelaide.  Later a hut was opened to replace the temporary arrangement in nearby Elder Park - The Cheer-Up Hut.


Alexandrine’s youngest son George lost his life at Gallipoli but she continued to write patriotic poems and to support the war effort.   She started the South Australian Returned Soldiers Association.   During the Depression of the 1930s, the Cheer-Up Hut provided meals for the poor.


Alexandrine and her husband retired to live on Kangaroo Island where their sons lived.  She continued to write poetry.  Alexandrine died on 12th March 1950 and was buried in the cemetery at Kingscote.


Sources:  Michael Sharkey, Editor of The Australian Poetry Journal
and


Here is Alexandra Seager’s poem about Violets, kindly sent to me by Michael Starkey:


(To the dear memory of George Rothwell Seager, whose good-bye was “If I stop a bit of German lead, be a sport!”)


To-day we wear the clinging violet


In memory of the brave,


While ever thoughts of fond but proud regret,

Some sleep beside the sobbing Dardanelles,


And some in gallant France,

‘Twas fitting that the young and brave should die


To build a nation’s name—


That strong young hands should mould her destiny


In an undying fame.


They fell, our fighting men;


They passed beyond our ken.

“Whom the gods love,” so the ancients said, “die young”


How could it other be?

What would we choose, if choose we could, for those


The glowing beauty of the blooming rose,


Or dry dead leaves and drear?

The commonplace of life—dull, sordid care,


Whose exit was a thrill;


No weary acquiescence in a plan


That long, dull years must fill.


Our aching hearts are filled


With sweet, sad thoughts; and for a little time


The yearning ache is stilled.

Then suddenly it wakes, as unaware


There flits across the track

A snatch of song, the perfume of a flower,


And all the world grows dim.


The barriers we built and felt a power


Melt in one thought of Him.

Yet some in all this storm, and stress, and strain,


When nations reel and rock,


In shameful safety ply their lust for gain,


For Love and Honour’s sake,


The sacrifice to make.

And we, the mothers, sisters, sweethearts, wives


Of these, our dear young dead,


Leave with them there the sunshine of our lives,

For them no tolling bell, no fun’ral pall—


But flowers whose spring-like fragrance touches all


With love in every breath.

“Far better to have loved and lost,” they say,


“Than never loved at all,”


For always at some time gold turns to gray,

We’ll strew with thoughts of love and fairest flowers


The paths our heroes trod;


We’ll bless the precious years that made them ours—


And leave the rest to God. 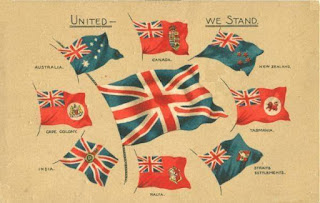 One of the most fantastic things about this commemorative WW1 project is the contact I now have with people from all corners of the world.   I recently received an e-mail from Michael Sharkey, who edits the ‘Australian Poetry Journal’ in Melbourne Australia.  Michael, a former university lecturer and poet who has been researching and lecturing on Australian women’s WW1 poetry for many years, had come across my weblog and very kindly sent me details of some more Australian women poets of the First World War.

Michael reminded me that when Helen Power was born, Tasmania, like the other Australian States, was a separate Crown Colony of the British Empire.  Australia as a single entity was not formed until 1901, when these Crown Colonies became The Confederacy of Australia.


I am very grateful to Michael and indeed to all those who contribute to this commemorative First World War project which is in memory of my Grandfather, an Old Contemptible with the Royal Field Artillery who survived service in both World Wars and of my two Great Uncles -  one who was killed at Arras on Easter Monday, 9th April 1917 and the other who died of Pneumonia on 8th November 1918 on board the Thames Barge '99' of which he was Master, following a trip to Dunkirk delivering vital supplies to the British Army.


I need to add the following Australian women poets of WW1 to my List: