Japan was one of Britain's allies during the First World War 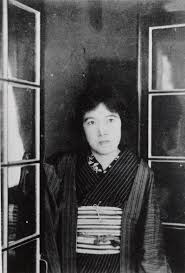 Akiko Yosano was the pen-name of the Japanese writer, poet, feminist, pacifist and social reformer Sho Ho, who was born on 7th December 1878 in  Sakai near Osaka to a wealthy family.   Her father realised his daughter's intelligence and allowed her to have a good education.   Akiko began writing poetry as a teenager.

When she was eleven years old Akiko was in charge of the family business making and selling Japanese sweets.

In 1901, Akiko married Tekan Yosano, who edited the poetry magazine "Myojo" (Translation: "Bright Star") a publication in which  many of Akiko's poems were printed.   She also had her first volume of poems published in 1901.

Akiko wrote a tremendous number of poems and essays and worked tirelessly for the cause of women's education, helping to found a school for girls - the Bunka Gaguin.    She died at the age of 63 on 29th May 1942, leaving a legacy of tens of thousands of poems.  Her poem "Thou shalt not die" dedicated to her brother during the Russo-Japanese War, was set to music and became a protest song.   Akiko Yosano is buried on the outskirts of Tokyo. 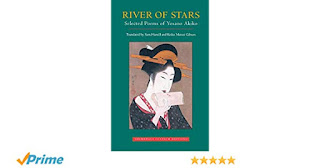 Thou shalt not die
O my young brother, I cry for you
Don't you understand you must not die!
You who were born the last of all
Command a special store of parents' love
Would parents place a blade in children's hands
Teaching them to murder other men
Teaching them to kill and then to die?
Have you so learned and grown to twenty-four?

O my brother, you must not die!
Could it be the Emperor His Grace
Exposeth not to jeopardy of war
But urgeth men to spilling human blood
And dying in the way of wild beasts,
Calling such death the path to glory?
If His Grace possesseth noble heart
What must be the thoughts that linger there?