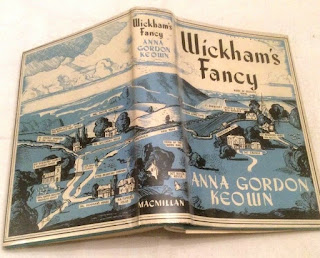 Anna Gordon Keown was born on 8th December 1899, the daughter of Robert Keown, a London wool merchant, and his wife Sarah, nee Gordon. Anna had the following siblings: : Robert, born in 1894 and Elizabeth, born in 1895.

Anna and her sister were educated initally at home by a Swiss governess and then at Cheltenham Ladies College and in Dresden, Germany. In 1921, Anna married William H. Seymour but the marriage did not last and in 1927 the couple divorced.

In 1943, Anna married writer and physician Dr Philip Gosse (1879–1959), son of the poet Sir Edmund Gosse. When Anna died, Philip presented a large collection of literature to the University of Leeds in her memory. This is known as the Keown Collection and is contained within the Brotherton Collection.

My thought shall never be that you are dead:
Who laughed so lately in this quiet place.
The dear and deep-eyed humour of that face
Held something ever-living, in Death's stead.
Scornful I hear the flat things they have said
And all their piteous platitudes of pain.
I laugh! I laugh! -- For you will come again -
This heart would never beat if you were dead.
The world's adrowse in twilight hushfulness,
There's purple lilac in your little room,
And somewhere out beyond the evening gloom
Small boys are culling summer watercress.
Of these familiar things I have no dread
Being so very sure you are not dead.

The introduction to Anna Gordon Keown’s Collected Poems, published in 1953, was written by Siegfried Sassoon, whose family were close friends of the Gosse family.

Find my Past and Free BMD

Illustration:  Cover of one of Anna's books.