Grateful thanks to Jim Marshall of the Harlech Old Library in Wales who sent  me a copy of the cover of one of Mary's collections. Additional information kindly supplied by Jose Holford @JosieHolford via Twitter 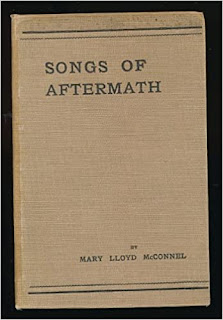 Mary Lloyd was born on 28th December 1860.  She married John McConnel, of Yorkshire and they lived in Larkfield, Ilkley, Yorkshire. Mary met Mary Baker Eddy, the founder of the Church of Christ, Scientist, in Concord, New Hampshire, USA:
"In 1904, Mrs. Mary Lloyd McConnel, of Ilkley, England, was in First Church of Christ, Scientist, of Concord, New Hampshire, when Mrs. Eddy spoke there..."
On the 1939 Census, Mary is listed as widowed and living at Larkfield, Skipton Rd. Ilkley, Yorkshire. She listed her occupation as a "Christian Science Practitioner".  Mary died on 19th March 1957.
Mary’s WW1 collections were:
“Songs In The Night” by Mary Lloyd McConnel published in 1920 by William Walker & Sons Ltd. - 72 pages of poems.
“Songs of Aftermath” by Mary LLoyd McConnel published by William Walker and Sons Ltd., January 1927  - see cover photo kindly sent by Jim Maxwell.
Mary seems to have published two collections of poems about WW1:

“Songs In The Night” by Mary Lloyd McConnel published in 1920 by William Walker & Sons Ltd. - 72 pages of poems.

Mary Lloyd McConnel also seems to have written for the "The Christian Science Monitor", as the following poem was published by them.   She is not listed in Catherine W. Reilly's "English Poetry of the First World War: A Bibliography" (St. Martin's Press, New York, 1978).  If anyone can help please get in touch.  The Christian Science Monitor was a daily newspaper founded in 1908 by Mary Baker Eddy, who founded the Church of Christ Scientist.

"There is no death!" a poem by Mary Lloyd McConnel

O Death! At home they call it death —

And sit and weep because they think

Their sons beloved are slain,

And they are left alone

To mourn their dead.

While we, across the trenches' top,

Have leaped to Life, and find

We have but left behind

The rags and blood and dirt

Of grimy battle field, and —

A great host of us,

All eager, happy, and alive —

Are pressing onwards toward a goal

We dimly see of duty, beauty,

Love, and Life, which calls us on

To tasks more glorious than

We could achieve midst stress

And storm and reek of cannon smoke.

Hark! You can hear us calling

From each to each a greeting

As we meet, — comrades and erstwhile foe.

"Friend! Is this all to death?

Why should we ever fear

This passing through a shadow

Which but seems a moment's shock,

As though we had but bowed our heads

To pass beneath a narrow doorway

From some dugout small, and found

Ourselves a little blinded by the light

Which shines from Heaven's eternal day?

How glad we are to find

Each other, and to prove

There is no death!"

There was a small community of Christian Scientists meeting in a humble "upper chamber." None were rich in this world's goods, but all were eager that everything pertaining to the services should reflect beauty and harmony. Although no rule was made, a tacit understanding existed that little expenditure was to be incurred for flowers, as funds could be employed to better advantage in furthering the cause of library and distribution work. At the beginning of each season a list was made of the women attending the services, and each one was to be responsible for one Sunday's floral offering.

Through this channel came to one woman an unlooked for opportunity in the practical development of her own garden. She had relied upon the periodical visits of a gardener, and so long as things looked neat she had remained content to imagine herself too busy in other ways to spare time or attention for out of doors. However, as the weeks went by she began to wonder what her garden would produce by the time her name appeared upon the "flower list." In looking around she discovered greater possibilities than she had known to exist, and soon found that the more she cut and gave away the more profusely her flowers bloomed, and that in sharing her garden with friends and neighbors she was learning to enjoy it as she had never done before.

With thanks to Historian Debbie Cameron for finding this poet for us.

Debbie has a Facebook page commemorating the women of WW1

'Majory Royce' was one of the pen names used by Isa Constance Nicoll, who was born in Kelso, Scotland on 22nd June 1881. Her parents were Sir William Robertson Nicoll (1851 – 1923 -  a Scottish Free Church minister, journalist, editor, and man of letters - who founded the “British Weekly”, a Nonconformist newspaper, with the help of publishers Hodder and Stoughton), and his wife, Isabella, nee Dunlop (1857–1894).  Isa’s brother was Henry Maurice Dunlop Nicoll (1884 –1953), who became a noted psychiatrist.  After the death of their mother in 1894, their father married Catherine Pollard (1863–1960) and Isa and Henry had a half-sister - Mildred Robertson Nicoll (1898–1995).

Isa grew up in Hampstead, London, where the family lived after Sir William's health necessitated retirement from the church. In 1909, she married Elystan Miles, who was at that time a Lieutenant in the Royal Artillery, and the couple lived in Eltham in south east London, and in Hampshire. In addition to the children's fiction, which Isa wrote and published using her pen name Marjory Royce, she also wrote and published work using her married name - Constance Miles.  On the 1939 Census, Isa and her husband were living in Shere in Guildford, Surrey and she listed her occupation as Journalist.

A SONG FROM THE TRENCHES by Marjory Royce

YOU, who have always loved the garden so,

Oh, Mother, are you wandering there to-night?

While yet the July roses blush and blow,

And the tall border blooms in the fading light.

The lovely corners that I used to know —

Down in this old dug-out, time passes slow

Amid the hum and screaming of the shell.

Through all the sadness there's one thought to cheer-

That English gardens still in peace may grow

Tranquil and safe. You are still happy, dear.

You, who have always loved the garden so !

From "One hundred of the best poems on the European War by Women Poets of the Empire" .- Edited by Forshaw, Charles Frederick (Elliott Stock, London, 1916) p. 138

which is available to read as a free download from Archive:

It is always exciting to discover a hitherto unknown poet. With thanks to  Historian Debbie Cameron for this information and for additional information to Lizbet Tobin on Debbie’s Facebook Page Remembering British Women In WW1 – The Home Front and Overseas 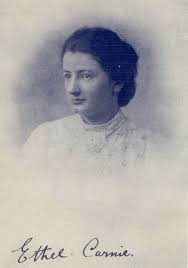 Ethel was born in Oswaldwhistle in Lancashire, UK, the birth being registered in Blackburn, Lancashire in the first quarter of 1886.  Her parents were David Carnie and his wife, Louisa Carnie, nee Entwisle.  Ethel had a brother, Rupert, who was born in 1888.  All the Carnie family members worked in Lancashire’s cotton industry.  Ethel began writing at an early age.  She was educated at Great Harwood British School from 1892 until 1899, where she showed promise in composition and teachers frequently read her essays aloud to the rest of the class.  Working in the mills from the age of eleven, Ethel  became a poet, journalist, children’s writer and novelist.  She was a prolific writer, publishing at least ten novels and writing and publishing poetry.

By 1911, Ethel was living in Great Harwood, Lancashire with her mother  and described herself as a cotton cop winder and journalist.  In June 1915, Ethel married Alfred Holdsworth.

Although he shared his wife’s socialist and anti-war views and may have applied for exemption on conscientious grounds, Alfred enlisted in the East Lancashire Regiment and was posted to the Western Front in 1917. Ethel was a socialist, a pacifist and anti conscription. She carried a red flag to the railway station to see her husband off. Ten months later, in 1918, he was reported missing, presumed dead. Later that year, Alfred was discovered alive in a British hospital, having been transferred from a prisoner of war camp.

Ethel protested against the introduction of conscription in WWI, addressed 20,000 women during the Women’s Peace Crusade and chaired local meetings of the British Citizen Party.   After her marriage, Ethel used her married name when writing.

During the 1920s Ethel edited and produced “The Clear Light”, an anti-fascist journal, with her husband.  She recognised the threat of Mussolini in the early 1930s. 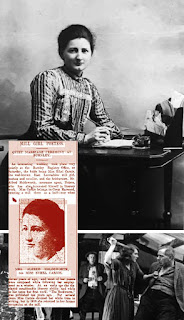 Dr Kathleen Bell is one of the leading figures in the campaign to introduce the work of the long-forgotten writer to a new generation. She writes that:

“at its best, Holdsworth’s poetry illuminates the gap between working-class people’s desire for liberty, often evident in their imaginative capacity, and the constraints and suffering of their lives”.

Ethel’s novel “Helen of Four Gates” (1917) was filmed in 1920. Lizbet Tobin discovered that prints exist in the Cinémathèque Québécoise film archive [35mm positive], and in the International Museum of Photography and Film at George Eastman House film archive [16mm reduction positive] and that there is a clip available:

Rhymes from the Factory (Blackburn: Denham, 1907)

The Lamp Girl, and other stories (London: Headley Brothers, 1913)

The Quest of the Golden Garter (London: Herbert Jenkins, 1927)