Ena was featured in the Exhibition of Poetry Written by School Pupils during the First World War, held at The Wilfred Owen Story in Birkenhead, Wirral, in March 2018 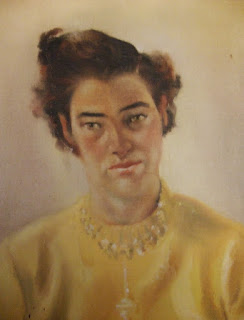 Ena Victoria Limebeer was born on 17th June 1897 in St. Mary Islington, Middlesex, in the north of London, UK. Her parents were Alfred J. Limebeer, an electrical mechanician, and his wife, Annie Emilia, nee Jefford.  Ena had two siblings – Alfred John, b. 1891, and Effie, b. 1895.

Educated at the North London Collegiate School in Camden, a school exclusively for girls, founded in 1850 by Frances Mary Buss, Suffragette and pioneer of advanced girls' education, Ena went on to study art and become a writer and artist.

On 9th June 1923, Ena married political scientist, originally from Bucharest, David Mitrany (1888 - 1975). The couple went to live in Kingston Blount, near Oxford. In 1929, Ena and her husband moved to America, where David had a visiting professorship at Harvard University and lectured at Yale University. In 1933, he became a permanent member of the newly established Institute for Advanced Studies at Princeton University. In September 1939, Ena and David returned to Britain.

After their return from America, Ena and David lived at The Lower Farm in Kingston Blount and also had a flat in London in Grove End Road, London NW 8. David Mitrany died in July 1975 and, following the death of her husband, Ena lived in Westminster, London.

Ena had poems and short stories published in magazines such as “New Age”, “The New Statesman”, “The Nation” and “The Athenaeum”, where Leonard Woolf was the literary editor. A collection of Ena’s poems was published by the Hogarth Press in July 1924: "To a Proud Phantom" - hand-printed and hand-bound by the Woolfs.

Ena also became famous for her watercolour paintings and exhibited them in the UK and at the Paris Salon during the 1960s. She painted all her life and after the publication of her last novel, focused entirely on painting. Ena signed her pictures in block letters: either EB or ENA LIMEBEER.  She died in the winter of 1984 in Westminster.

Was he dead? Had I heard it aright?
No, for there was his image imprinted in gold on my mind.
Does he live? The prince of men’s sight
No, for I wander ‘neath cypress, his flower-decked tomb to find.

Then ‘tis true? They told me, I know:
But I find not his tomb in the shadows down in the cypress glade.
And softly they answer and low,
“Only a rough wooden cross stands quiv’ring ‘neath Ardennes’ grey shade.

“Not as other men died,
Fighting with failing breath.
None were close at his side,
To sweeten the pangs of his death.

“Straight he stood and his eyes
Saw more than his slayers knew.
He watched his life sun rise,
His death star fade from view.

“They laugh at him who died
To keep his captain’s word,
And deeply in his side
In scorn they plunge their sword.

“And now beneath the shade
Of Ardennes’ leaves he lies.
Mourn not! All stars must fade
When Suns in glory rise.”


Here is a link to a news report about the opening of the exhibition of Poetry written by Schoolchildren during WW1 at the WOS on 17th March 2018:  https://www.youtube.com/watch?v=78b40hAbqb8

Self Portrait by Ena from http://furrowedmiddlebrow.blogspot.com/2014/09/ena-limebeer-dove-and-roebuck-1933-and.html