The City of God is late become a seaport town
For the clean and bronzed sailors walking up and down
And the bearded Commanders, the Captains so brave,
Bringing there the taste of the sea from the salt sea wave.

There are boys in the City's streets make holiday
And all around are playing-fields and the boys at play;
They dive in clear waters, climb many a high tree,
They look out as they used to do for a ship at sea.

The sailor keeps a clean soul on the seas untrod;
There is room in the great spaces for the Vision of God
Walking on the waters, bidding him not fear;
He has the very cleanest eyes a man can wear.

There's salt wind in Heaven and the salt sea-spray,
And the little midshipmen boys are shouting at their play,
There's a soft sound of waters lapping on the shore,
The sailor he is home from sea to go back no more. 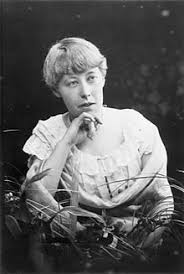 Katharine was born on 23rd January 1859 into a large farming family in Clondalkin, County Dublin, and educated at St. Catherine's, a convent school in Drogheda. Her first poetry was published in 1878. She met and became friendly with the poet Gerard Manley Hopkins in 1886.

Katharine was a close associate of William Butler Yeats and corresponded with the poet Francis Ledwidge.