With thanks to Yvon Davis and to Dominic Sheridan for their help.

Dominic’s Australian Great War Poetry project is on http://australiangreatwarpoetry.blogspot.com/ and on Facebook https://www.facebook.com/australianwarpoetry/ 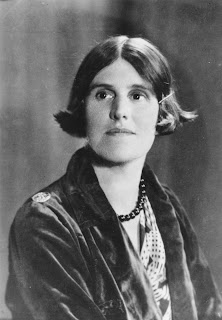 Doris was born on 29th August 1889 in Summer Hill, Sydney. She was the elder daughter of  Gregory Augustine Kerr, a civil servant, and his wife, Adelaide Eva, née Boake. Doris’s maternal grandfather, Barcroft Capel Boake (1838-1921), emigrated to Australia in the late 1850s. His son was the poet Barcroft Boake (1866 – 1892). By 1915 the family had settled at Caulfield, a suburb of Melbourne, Victoria, Australia.

Although she attended a state school, Doris claimed that 'she was self-educated at the Prahran Public Library'. She left school and worked as a shop-assistant, before becoming a typist, then a librarian. Doris’s first story was published in the “Australasian” in January 1916.

Doris never married.  She was an active member of P.E.N. International and a foundating member of the Society of Australian Authors.   By the early 1940s, Doris was working as secretary to J. K. Moir, who was credit manager at Paynes Bon Marché Pty. Ltd., who was a supporter of Australian literature.

Doris died on 5th June 1944 at Caulfield and was cremated.

A collection of Doris's verse with a foreword by her friend Myra Morris was published in 1949 as “The Selected Poems of Capel Boake” and her two main novels were “Painted Clay” and “The Dark Thread”.

The Scarlet poppy burns again,
The tender grasses wave,
The bitter almond sheds her leaves
On many a nameless grave.
The earth has healed her wounds again
Where Turk and Christian met,
And stark against an alien sky
The cross of Christ is set.

From north and south and east and west,
With eager eyes aflame,
With heads erect and laughing lips
The young Crusaders came.
The waves still wash the rocky coast,
The evening shadows creep
Where through the dim, receding years
They tread the halls of sleep.

O sacred land, Gallipoli!
Home of our youthful dead;
How friendly is the springing grass
That shields each narrow bed!
The toiling peasant turns to pray,
Calling upon his God,
And little children laugh and play
Where once their footsteps trod.

Mourn not for them, nor wish them back;
Life cannot harm them now;
The kiss of death has touched each cheek
And pressed each icy brow.
Yet, on this day when first they died,
Turn back the troubled years;
Pause in the press of life awhile;
Give them again – our tears.

Anzac Day is a national day of remembrance in Australia and New Zealand to commemorate all Australians and New Zealanders "who served and died in all wars, conflicts, and peacekeeping operations" and "the contribution and suffering of all those who have served". Observed annually on 25th  April, Anzac Day was originally devised to honour the members of the Australian and New Zealand Army Corps (ANZAC) who served in the Gallipoli Campaign, their first engagement in the Great War (1914–1918).