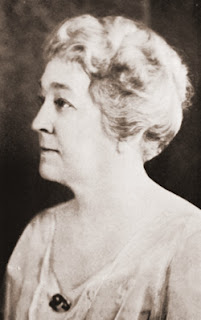 Moina Belle Michael was born on 15th August 1869 in Good Hope, in Walton County, Georgia, America.. She was the eldest daughter and second of seven children born to John Marion Michael, a Confederate Veteran and Alice Sherwood.

In Germany when the First World War broke out in August 1914, Moina travelled to Rome, where she assisted around 12,000 US tourists to find a passage home across the Atlantic. She returned to the US on the RMS “Carpathia”, the ship that rescued the survivors of the RMS “Titanic” tragedy, and returned to teaching at Normal School in Athens, Georgia.

She was a professor at the University of Georgia when the U.S. entered the conflict in April 1917, took leave of absence from her work and volunteered to assist in the New York-based training headquarters for overseas YWCA workers.

The idea of using red Flanders poppies as a means of commemoration came from Moina after she read Canadian Medical Officer John McCrae's poem "In Flanders Fields".  Moina was determined not to 'break faith' and vowed always to wear Moina travelled to Paris, France for a conference of YMCA Secretaries of the Allied Nations in 1919.

After the War, Moina returned to the University of Georgia and taught a class of disabled servicemen. Realizing the need to provide financial and occupational support for these servicemen, she pursued the idea of selling silk poppies as a means of raising funds to assist disabled veterans. In 1921, her efforts resulted in the poppy being adopted as a symbol of remembrance for war veterans by the American Legion Auxiliary, and, later that year, by Earl Haig's British Legion Appeal Fund, which later became known as The Royal British Legion.

Moina died on 10th May 1944.  During her lifetime, she received numerous awards. She retired from the University of Georgia in 1934, and published an autobiography in 1941, "The Miracle Flower: The Story of the Flanders Fields Memorial Poppy".

John McCrae was born in Canada in 1872.  He studied medicine and also served as an Artillery Officer in the Canadian Artillery during the Second Boer War.  He was among the first Canadian troops to go to the Western Front in 1914.  Incidentally, it was John McCrae who observed that the massive use of manure in the fields of northern France caused infections in wounds sustained during the fighting in that area.

John wrote the poem after the funeral of his friend Lt. Alexis Helmer, who was killed at the Second Battle of Ypres.  McCrae noticed some poppies were blooming in the cemetery. They appeared to be the only flower that flourished in the mud and mess.   McCrae apparently threw his poem away (as one does!) but it was rescued by a fellow officer who sent it to "Punch" Magazine in England.  They published "In Flanders Fields" on 8th December 1915.   Following his service as an Artillery Officer at the Front, McCrae was sent to work in a military hospital in Bologne - away from the shells. He fell ill on 27th January 1918 with Pneumonia, died the following day and was buried in Wimereux Communal Cemetery, Wimereux, Pas de Calais, France.

British historian Lord Macaulay wrote in 1855 about the site of the Battle of Landen in the Province of Brabant. The battle took place in 1693, during the Nine Years War between the French and the English when William III was on the throne.  Landen is in Belgium and is approximately one hundred miles from Ypres.  The French lost 9,000 men and the English 19,000:

"The next summer the soil, fertilised by twenty thousand corpses, broke forth into millions of poppies. The traveller who, on the road from Saint Tron to Tirlemont, saw that vast sheet of rich scarlet spreading from Landen to Neerwinden, could hardly help fancying that the figurative prediction of the Hebrew Prophet was literally accomplished, that the earth was disclosing her blood, and refusing to cover the slain."