I have always liked the work of Robert Graves, so I was really pleased to discover his sister, Rosaleen was also a poet.

Rosaleen, sister of the WW1 soldier poet and writer Robert Graves, was born in Wimbledon on 7th March 1894.   Her father was Alfred Perceval Graves, who was also a poet. He was the second son of The Rt. Rev. Charles Graves, Bishop of Limerick. (1846 – 1931). Alfred, who was also a poet, was a school inspector. Rosaleen’s mother was Amalie (‘Amy’) Elizabeth Sophie (or Sophia) von Ranke (1857 – 1951), eldest daughter of Professor Heinrich von Ranke MD, of Munich.  Rosaleen’s grandmother was the daughter of Norwegian astronomer Ludwig Tiarks. 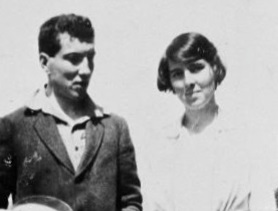 Reading Rosaleen’s poem “The Smells of Home” in Dominic Hibberd’s anthology “The Winter of the World “ made me wonder if Rosaleen had been a nurse during the First World War, so I contacted the British Red Cross Archives – before their list of WW1 VADs was put on line – and, sure enough, she had.

Rosaleen joined the Red Cross Voluntary Aid Detachment on 17th September 1915 and worked at Chislehurst VAD Hospital, Kent for three months.  She worked at Paddington VAD Hospital in London from April to July 1916 and then in the 4th London General Hospital, where she met Siegfried Sassoon when he was sent there for treatment. Rosaleen was posted to France at the end of 1917, where she worked at No. 54 General Hospital. Rosaleen served until 14th March 1919.   She was awarded a Scarlet Efficiency Stripe.

Rosaleen was a poet and a gifted musician with the ambition of becoming a concent pianist.  However, after the War, Rosaleen trained as a doctor and became a general practitioner.  In the Spring of 1932, Rosaleen married James Francis Cooper at St. Martin’s in London.  The couple had three children.

Among Rosaleen’s published works are “Night Sounds and other poems”, published by Basil Blackwell in Oxford in 1923, “Snapdragons Poems“ by Rosaleen Graves Cooper and “The Silver Mirror. Breton Folk Air”, words translated from the Breton by A.P. Graves and arranged by R. Graves (1928).

I have been trying to discover whether Rosaleen Graves may have met Wilfred Owen.  As Wilfred attended the wedding of Robert Graves in London, I was curious to know whether Rosaleen had been there too but it seems she was unable to get leave.

To this end, I recently asked The Robert Graves Society Facebook Group whether Rosaleen attended the wedding of her brother, Robert, in London in 1918.  I received a lovely reply from Hilaire Wood, a Society member:

' According to Robert's father's diary, quoted by Richard Perceval Graves in The Assault Heroic, p 191: "We were almost the first arrivals but the church filled up. Family (Amy, I and six children, including Perceval and Susie but dear Roz had failed to get leave) CLG, Lily, Rosy... Miss North... and no end of others -" '

Photographs and additional information kindly supplied by Roger Cooper, Rosaleen's son.
Rosaleen's poem "The Smells of Home" was first published in "The Spectator" on 30th November 1918
“The Smells of Home” by Rosaleen Graves
I shut the door and left behind
The reek of wounds – the cries
Of “Sister! Sister! – Go Steady Sister! –
The hateful sight of flies
That come like mourners dressed in black,
And will not be thrust aside,
But over the sheets come prying back
To a hand where blood has dried.
A scented slap of morning wind
Came suddenly as I stood
The grim things of the ward shut out
By a panel or two of wood.
Oh wind!  Can it be the meadows of France
That you come whistling through?
For these are the smells of my own country
You carry along with you.
The breath of ferns and pale marsh-flowers,
Of meadowsweet and phlox,
Drowsed apricot, of gorse that flames
In the purple shadow of rocks,
The warm, hewn fragrance of red fir
And (smell of heart’s desire!)
Blue incense from the peat that smoulders
Upon an English fire.
The chilly sweeess of drenched things
At morning when the sky
Shows yellow behind a bird’s dark wings
And threads of mist go by.
Strange air blows cold from another world,
The still fields shine like glass,
A minute goes like a thousand years,
And there are pearls in the grass.
Oh wind!  Can it be the meadows of France
That you come sighing through?
For these are the things of my own country
Whose scent you bring with you.
Dawn on the bog, and burning peat,
A wild sea tattered with foam,
Red heather on the eternal hills –
These are the smells of home.
From: “The Winter of the World: Poems of the Great War” compiled by Dominic Hibberd and John Onions  (Constable & Robinson, London, 2007), page 269