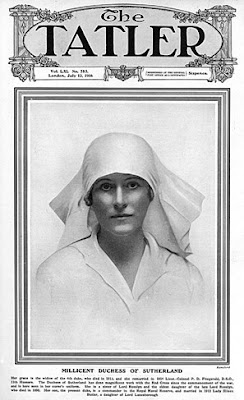 Blanche Adeliza was the widow of the Hon. Charles Maynard, so Millicent and her siblings were half-sisters to Daisy Greville, Countess of Warwick and Blanche, Lady Algernon Gordon-Lennox (mother to Ivy Cavendish-Bentinck, Duchess of Portland). Their maternal grandfather was Henry Fitzroy, whose father, the Reverend Lord Henry Fitzroy, was a Canon of Westminster Abbey, and whose grandfather was a Prime Minister - Augustus FitzRoy, 3rd Duke of Grafton.

Her husband inherited the Dukedom of Sutherland on his father's death in 1892;   he died in 1913.

When the First World War broke out in 1914, Millicent was amongst the first to establish a Red Cross Ambulance Unit in Belgium. After escaping from Belgium when the Germans invaded, her unit became a British Red Cross Hospital Unit and went to France in the summer of 1915.  “The Hospital in the Oat Field” was recorded in a series of paintings by French artist Victor Tardieu (1870 – 1937) who volunteered to join the French Army in 1914. The paintings were purchased in 1913 by the Florence Nightingale Museum in London.

Millicent moved to Roubaix in June 1918 with her Red Cross Unit. She was awarded the Belgian Royal Red Cross, the French Croix de Guerre and the British Red Cross for her tireless work during the conflict.

After the war, Millicent lived in France and was again captured by the Germans in 1940. She escaped through Spain and Portugal and went to live in the USA, returning to Paris in 1945.

The Tirailleur (To the memory of René) by Millicent Sutherland

He was so young to die - -
Ah; these are catchwords now
When death sucks red lips white
Yet laurel-crowns the brow!

The while we slaked his thirst
Around us night-flies sang,
Why did we wish him life?
Why did we fel a pang?

He lived the hight to dawn,
And all the hot day through
The fever lit his eyes,
His limbs no resting knew.

“Je pars tout seul”, he said.
Yet radiance on his face
Bespoke him radiant dreams
Veiled in eternal grace.

The hour he died, a moth
With golden quivering wings
Upon his pillow poised,
And whispered lovely things.

To his dear fluttering soul - -
Of brothers at his side,
And comrades crying “Haste,
The boat is on the tide” –

Till with the setting sun
Outward his spirit leapt - -
In calm the moon arose,
Only the Sister wept.

First published in “The Fiery Cross: An Anthology”