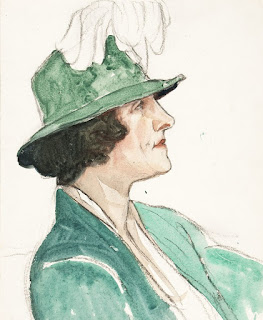 Ethel Maud Ashley-Cooper was born on 16th December 1870. Her parents were Anthony Ashley-Cooper, 8th Earl of Shaftesbury Bt DL, (son of the 7th Earl of Shaftesbury), and his wife, Harriet Augusta Anna Seymourina (Chichester), only daughter (and only surviving child) of the 3rd Marquess of Donegall. Ethel Maud’s siblings were: Margaret, b. 1858, Evelyn, b. 1865, Mildred, b. 1867, Violet, b.1868 and Anthony, b. 1869.  The family lived on an estate near Wimbourne, Dorset, UK.

Maud and George went on to have three children: Sir Victor Alexander George Anthony Warrender 8th Bt., 1st Baron Bruntisfield, Harold John Warrender and Violet Helen Marie Warrender. In 1903, the Warrenders bought Leasam House near Rye in East Sussex. Maud entertained many of the famous people of the day - the Elgars, the Kiplings, the Alfred Lyttletons, Nellie Melba and Ellen Terry.   George became Commander-in-Chief, Plymouth in March 1916. He requested retirement in December 1916, owing to a deterioration in his health. He died in January 1917.

After her husband's death in January 1917, Maud worked for the Red Cross collecting books for the wounded. In her memoir "My First Sixty Years", she says:  "When I returned from Plymouth in 1917 I worked for the Red Cross Hospital Library, which was started by Mrs. Gaskell in order to supply the wounded  everywhere in our many campaigns during the War.   Millions of books were sent out from Surrey House, which was lent by Lady Battersea, where now stands the Regal Cinema at the Marble Arch.  The Red Cross Library was started by May Gaskell because she had remembered how, in the Boer War, any books that happened to be in the Hospital had to be divided into portions and handed on from bed to bed until they fell to pieces." 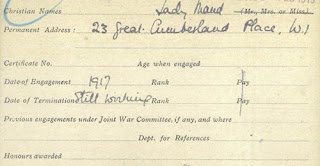 In 1917 Maud became a District Commissioner of the Rye Division of Girl Guides and wrote a Marching Song for the Guides, "bringing in all our slogans":

Let us sing our way through life.

There’s a song for those who hear it.

There is Music in the Sunshine

We can shed — We take out stand

And we vow, as Guides,

We’ll be there to knd a hand.

Be prepared shall be our watchword.

Let us sing it every day.

Helping others on their way ;

Be prepared for joy or sorrow.

Always smiling, come what may.

And the world shall see what Guides can be

As we march along on life’s highway.

That the song the Guides are singing

Gives us courage, brings us love.

Let us make our lives a song,

And will lift our feet

As we bravely march along.

In her memoir, Maud tells us:  “Hermann Darewski composed a marching tune to these words, most generously giving me the copyright and five thousand copies, which were sold for the Guide Funds.  (From “My First Sixty Years” by Maud Warrender (Cassell & Co. Ltd., London, 1933) pp. 128 and 129.

Maud was also a founding member of the charity which, in her day, was known as the Musicians Benevolent Fund and is now called Help Musicians UK

The Poetry Society was founded in 1909 to promote “a more general recognition and appreciation of poetry”.