With thanks to Historian Debbie Cameron for reminding me

that I had not fully researched Elizabeth and for finding the poem, photograph

and cover of one of Elizabeth's collections featured here. 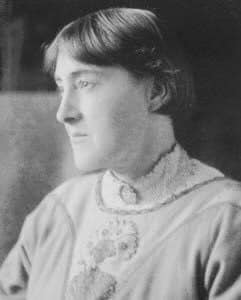 Elizabeth Gibson was born in Hexham, Northumberland, UK in January 1869, the birth being registered in the first quarter of the year and the Baptism taking place on 16th January 1869.  Elizabeth’s parents were John Pattison Gibson, a chemist, and his wife, Judith Frances, nee Walton (1836 - 1902), who were married in September 1861.

By 1911, Elizabeth described herself in the Census return as an author.

published in the magazine “Poetry”, September 1915.

You are born; you are no more mine:

I have let you go forever.

You shall sail by sea and river;

You shall walk by road and track;

You shall fly through wind and weather;

But nevermore come back,

That our hearts may laugh together.

There is an excellent biography of Elizabeth written by Judy Greenway http://www.judygreenway.org.uk/wp/elizabeth-gibson-cheyne-biographical-outline-timeline-and-list-of-publications/ 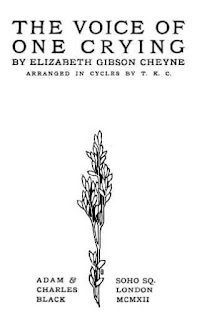