This was found for us by Historian Debbie Cameron and was written by K.M.E. Gotelee and published in “The Landswoman”, magazine March 1918, p.56. Written to the tune of ‘Keep the Home Fires Burning’.  This poem was selected as third prize for The Land Army songs competition run by “The Landswoman” magazine.

Kathleen Mary Gotelee was born in Isalington, London, UK in 1890 – the birth being registered in December of that year.  Her parents were John Gotelee, a shop walker in a drapers shop, and his wife, Mary Jane, nee Bills.

We were summoned from the city, from the cottage and the hall,

From the hillside and the valley, and we answered to the call.

And our King and Country need our help and ask for earnest toil.

In the soft winds blowing

Though your work seems hard at times ’tis not in vain.

Golden sheaves at Harvest Time will the victory gain.

In the farmyard and the forest we are bravely doing our bit,

Some are milking cows for England, some the giant oak trees split.

We are working for our country, and we’re glad to have the chance,

By increasing England’s food supply, to help our lads in France.

Though the Germans raid us,

Keep our food stores fortified till the boys come home. 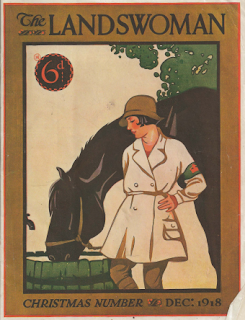 The popular First World War song “Keep the Home Fires burning” - the lyrics were written by American poet Lena Guilbert Brown Ford who was killed in an air raid in London in 1918, and the music was composed by Ivor Novello.

The origin of keeping the home fires burning 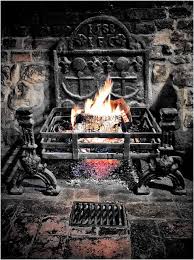 The ancient Romans believed that every home had a hearth and it was the hearth where the fire burned, the family gathered for sustenance, communication and protection. This concept was so important to the culture that there was a huge city hearth - the Vestal temple - where the fire of the home goddess, Vesta, burned forever without ever going out. This sacred flame was protected by soldiers.

The place where the Goddess Vesta was honoured within every ordinary home was also the hearth,and that is where women prepared food and cooked. Some food was always offered back into the fire as an offering to Vesta for her blessing and protection. Often husbands were sent away on military duty for years on end and their wives at home were not just expected to keep the home and often the business running, but to wait for their husbands faithfully until they returned. They prayed to Vesta to ensure their family members' safe return and to keep the fires of love stoked. The saying: " Keep the home fires burning " was inspired by this practice.

Sources for the lyrics written by Kathleen: