While researching Naomi’s father, John Scott Haldane, for my WW1 commemorative weblog Fascinating Facts of the Great War, I realised that Naomi was a WW1 female poet.  She also served with the British Red Cross during the conflict.   http://fascinatingfactsofww1.blogspot.com/2023/01/john-scott-haldane-1860-1936-british.html 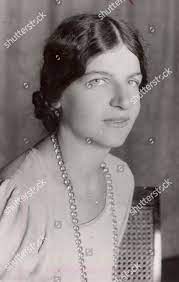 Naomi was educated at the Dragon School in Oxford and was accepted to study at Oxford University by Lady Margaret Hall College.  However, when war broke out Naomi volunteered to serve with the Red Cross and trained as a Probationer at St Thomas, Hospital in 1917. She then served in the Outpatient Ward, Radcliffe Infirmary, followed by six months working mornings at Wingfield House Military Hospital, Trowbridge.

After a long life and having written many books, Naomi died on 11th January 1999.

Naomi Mitchison’s poetry collections were: “The Laburnum Branch” (Jonathan Cape, London, 1926), in which “Green Boughs” was included on pages 59-60, and “The Cleansing of the Knife and Other Poems” (1978).

Here is one  of Naomi's poems:

My young, dear friends are dead,

All my own generation.

Whose young lovers are dead.

They came from the gates of birth

To boyhood happy and strong,

To a youth of glorious days,

We give them honour and song,

And theirs, theirs is the praise.

But the old inherit the earth.

They knew what was right and wrong,

Their lives that should have been long!

But everything lovely ends.

They came from college or school,

They did not falter or tire,

But the old, the stupid had rule

Over that eager nation,

And all my own generation

They have cast into the fire.

From The Skipper’s War – written by the Headmaster ‘Skipper’ Lynam about  pupils of the Dragon School, Oxford – February 12th 1916    “Yesterday, our dear young Naomi Haldane was married to Dick Mitchison, a 2nd Lieutenant with the Queen’s Bays. The marriage took place at the Oxford Registry Office on the High Street. Only a few friends (including Aldous Huxley, the editor of the literary magazine, ‘Oxford Poetry’) attended and the austerity of these times restrained them from holding a party.  We, however, celebrated by taking a half-holiday! Naomi has been training as a nurse at St. Thomas’s Hospital in London, but recently has been helping with the outpatients at the Radcliffe Infirmary.

It is only ten years since Naomi was performing on the OPS stage here in Romeo & Juliet.  How quickly our children grow up!”

One worthy Old Dragon: Naomi Mitchison (then Haldane), who qualified for the University of Oxford in 1914, having taken the Oxford higher local examination. She became a member of the Society of Oxford Home Students and was able to take a degree course in science. The outbreak of war in 1914 prevented her from completing the course, however, when she went off to train to become a nurse.”

Charles "Skipper" Cotterill Lynam (15 June 1858, Stoke-on-Trent – 27 October 1938) was an English headmaster, yachtsman, poet and author. In 1882 Lynam was appointed assistant master at the Oxford Preparatory School (now called the Dragon School). He became headmaster in 1886 and in 1895 moved the school from Crick Road to Bardwell Road into buildings designed by his father.  The ‘Blue Dragon’ was the name of Lynam’s yuacht.