Desémea Newman was born in Bradford, Yorkshire, UK on 20th June 1885.  She taught at Keighley National School and in December 1910 married married Henry J. Wilson, a customs officer born 13 December 1880.  The couple moved to Berkshire, where they were living in 1939.

Desémea Newman Wilson wrote a poem dedicated to the memory of one of her former pupils - Sergeant John Edward Robinson - who was killed in action in Gallipoli on 21st August 1915. A former Keighley Boys Grammar School pupil and a member of the All Saint's Church Bible Class, nine of whom enlisted together. 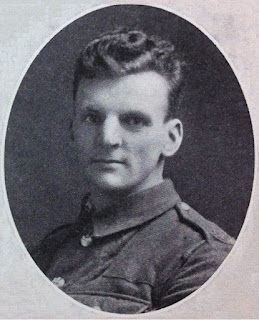 Within his heart there stirred the lure of lovely things,

The poetry, the music, the love of life;

The lore of books was his, the magic power it brings,

And youth's proud emulation all he dreamed of strife.

He loved the quiet dawn, the grey-white mist wreaths curled

Over the level fields; the twilight's dusky fall;

And in a deadlier field met the last night of all.

…. Oh gallant soul that shrank, yet deep of danger drank,

Oh, hesitant, reluctant feet that yet pressed on.

The cup is quaffed, the journey done. Within the rank

Your place is filled. But eloquent though you are gone,

Your voice shall speak to those who loved, and through all days,

Circle your dead but deathless brows the victor's bays.

Desémea Newman Wilson went on to write at least six books and poems which were published in between the war years.

National Schools were built on behalf of the Anglican Church.

Photograph of Sergeant John Edward Robinson by kind permission of Menofworth who tell me that all the lads from Keighley Boys Grammar School who lost their lives are listed in their roll of honour and published on their website here: