It is always exciting to discover a hitherto unknown First World War poet and I am very grateful to Paul Whitehead for his kind help in finding poems by Flora and information about her life. Paul is jointly in charge of the Facebook page Flora Thompson – author - exploring and celebrating the life & writings of author / poet Flora Thompson, 1876 [or'77] - 1947. Best known for her Lark Rise to Candleford trilogy. 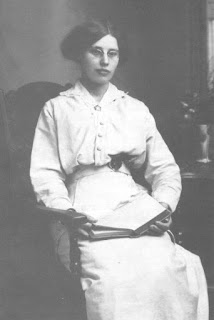 Born Flora Jane Timms in Juniper Hill in northeast Oxfordshire on 5th December 1876, Flora’s parents were Albert Timms, a stonemason, and his wife, Emma, a nursemaid.  Flora was the eldest of Albert and Emma’s twelve children, of whom only six survived. One of her younger sisters was Betty Timms, who also became a writer and is best known for her children's book “The Little Grey Men of the Moor”.  Flora was educated at the parish school in the village of Cottisford. Her mother encouraged her to read and write. Like so many children at that time, Flora left school at the age of 14 and went on to become a very good writer.

In 1891, Flora went to work as a counter clerk at the post office in Fringford in Oxfordshire. She went on to work in various other post offices, including offices at Grayshott, Yateley and Winton in Bournemouth.

In 1903 Flora married John William Thompson, a post office clerk and telegraphist from the Isle of Wight. They were married in Twickenham Parish Church. The couple went to live in Bournemouth. They had a daughter, Winifred Grace, b.1903 and two sons, Henry Basil, b.1909 and Peter Redmond, b. 1918.  In 1916 they moved to Liphook in Hampshire. Flora's favourite brother, Edwin, joined the 2nd Eastern Ontario Regiment on 5th May 1915 and was killed near Ypres on 26th April 1916.

The death of Flora's younger son during the Second World War also affected her deeply – her health suffered and she died in 1947.  Flora was buried at Longcross Cemetery, Dartmouth, Devon.

Flora’s first publication was a collection of poems entitled 'Bog-Myrtle and Peat'  (Philip Allen & Co, London, 1921).  Flora's other works include (i) the 250,000 word "The Peverel Papers: Nature Notes”, written between 1921 and 1927 inclusive; (ii) the classic "Lark Rise to Candleford" trilogy, first published in 1945;  (iii) "Heatherley”, published posthumously, which is in some respects a continuation of the trilogy.

Here are some of Flora's poems:

She bound the sheaves the tractor threw,

A sun-bright maid with eyes of blue,

Then reaped the hollow by the spring,

And this is the song I heard her sing:-

O, come ye soon, or the corn will be mown,

And only stubble lie bare and lone,

And grey mist rise from the river!

O, come ye soon, or the leaves will be shed,

Leaves all russet and yellow and red,

And we shall not hear them shiver!

Shall hold thee captive for ever!

We watched him fluttering against the sky:

Soaring and wheeling in tumultuous flight;

So frail, so light.

So swift, so bold.

'Till men's cold hearts kindled to pride to view,

What Man dared do!

'Ow they creeps on unawares,

Those blooming minutes. Nine. It's queer,

Waddled round in your inside,

'Fore I knowed it; only Four

'Twixt us and Eternity.

Every word I've ever said

Seems a-shouting in my head.

Fairly shook up in the sky,

Rattled by the dogs of War.

Funny thing – that star all white

They're only wishes sent ter God

Trailing up His golden stairs.

Over the Top – to Kingdom Come!

Photograph of Flora taken presumably during or soon after the First World War, since Flora is wearing Edwin's regimental badge as a brooch - from http://www.johnowensmith.co.uk/flora/pics.htm