I have written about Winifred Mabel Letts previously because she featured in the very first commemorative WW1 exhibition we produced - Female Poets of the First World War - held at the award-winning Wilfred Owen Story in Argyle Street, Birkenhead, Wirral, UK from November 2012.  However, thanks to Paul Whitehead of the Facebook Page about writer and poet Flora Thompson, I noticed recently that the Wikipedia entry for Winifred still has her middle name incorrectly given as Mary.

Bairbre O’Hogan has been researching Winifred M. Letts for many years. Bairbre’s mother was a friend of Winifred’s and Bairbre remembers Winifred very well.

Winifred Mabel Letts was born on 10th February 1882 in Salford, Manchester, UK, formerly in the County of Lancashire.  Her parents were Ernest Frederick Letts, an Anglican church minister and his wife, Mary Isabel, nee Ferrier.  Winifred had the following siblings:  Mary F.S., b. 1877 and Dorothy M., b. 1878.  After the death of Winifred’s father, the family moved to Ireland.

Educated at Abbots Bromley School in Staffordshire, Winifred went on to study at Alexandra College in Dublin.  Her career as a writer began in 1907 when the novels “Waste Castle” and “The Story Spinner” were published. 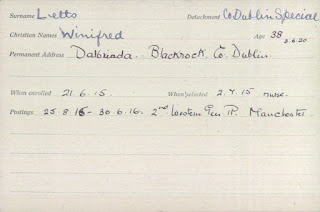 During the First World War, Winifred joined the Volunteer Aid Detachment and worked as a nurse at Manchester Base Hospital. She then trained as a medical masseuse – that is a physiotherapist in modern parlance - with the Almeric Paget Military Massage Corps. Winifred worked at Army camps in Manchester and Alnwick, Northumberland during WW1. 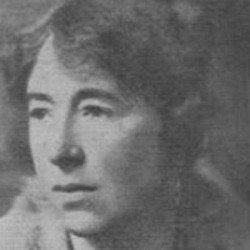 The photograph of Winifred and her birth certificate are reproduced here by kind permission of Bairbre O’Hogan.  Winifred’s WW1 VAD Record Card is from The British Red Cross website.

“TO A SOLDIER IN HOSPITAL”

Courage came to you with your boyhood's grace

Of ardent life and limb.

Each day new dangers steeled you to the test,

To ride, to climb, to swim.

Your hot blood taught you carelessness of death

So when you went to play another game

You could not but be brave :

The end — perhaps your grave.

What matter? On the winning of a goal

You staked your soul.

Yes, you wore courage as you wore your youth

With carelessness and joy.

But in what Spartan school of discipline

Did you get patience, boy?

How did you learn to bear this long-drawn pain

Impulsive as a colt,

How do you lie here month by weary month

Helpless and not revolt?

What joy can these monotonous days afford

Here in a ward?

Yet you are merry as the birds in spring,

Or feign the gayety,

Lest those who dress and tend your wound each day

Should guess the agony.

Lest they should suffer — this the only fear

You let draw near.

Graybeard philosophy has sought in books

And argument this truth,

That man is greater than his pain, but you

Have learnt it in your youth.

You know the wisdom taught by Calvary

Death would have found you brave, but braver still

You face each lagging day,

You bear your knowledge lightly, graduate

Careless philosopher, the first to laugh,

The latest to complain,

Unmindful that you teach, you taught me this

In your long fight with pain :

Since God made man so good — here stands my creed —

There is a book of the exhibition held at the WOS "Female Poets of the First World War - Volume One" available via Amazon.