With grateful thanks to Liz Tobin for finding Muriel for us

Muriel was also a classical pianist. She worked as a reporter for a Toronto newspaper and published several books, novels and sonnets.  From an early age, she had an interest in the Theosophical Movement and cosmological theory. Her most well-known book is “Pursuit of Destiny”, the title of which was later changed to “Tarot and Astrology”.

After marrying Abraham Louis Hasbrouck in December 1931, Muriel moved from Canada to New York. The couple collaborated to write a collection/series entitled “Space-Time Forecasting and Economic Trends 1958-1996”, about the correlation of natural forces on market forecasting.  Louis died in June 1979.  Muriel and Louis do not appear to have had any children. Muriel died in Bayside, Queens’ New York on 27th November 1981. 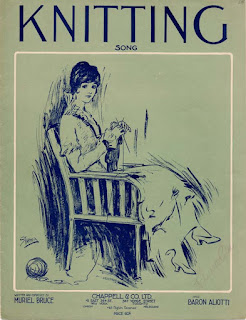 Written and composed by Muriel E Bruce and Baron Alotti in about 1915, this patriotic song is dedicated to The Imperial Order Daughters of the Empire. The song refers to the struggle of the men on the battlefield, the conditions they face and the loss of comrades beside them, while at home the needles are lovingly busy knitting for the brave sons, brothers, fathers and lovers.   The sheet music was published by Chappell & Co. Ltd. and the cover was illustrated by the Starmer brothers. 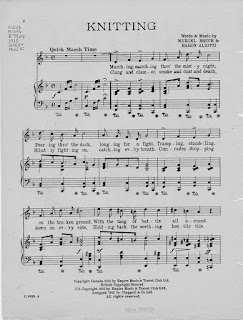 Muriel also wrote other songs during the First World War:

“Why aren’t you in Khaki? /This means you! / Any old excuse won’t do,” flooded the streets during recruitment marches with the intention of inspiring the enlistment of Britain’s sons. The success of Muriel Bruce’s collection of songs grants her the honour of common historiographical representation as thetoken women when discussing entertainment on the Canadian home front.” From “The War on Score:  Ontarian Women’s Songs during The Great War” by Karina Stellato March 29, 2019

Very similar to her song “Knitting”, and written in 1916, it is dedicated ‘To my soldier,’ and sings about sitting knitting socks while waiting and dreaming for her beloved to come home.  As the knitter falls asleep, she dreams her dear brave man has come home, only to wake and find herself alone.  Published in London by The Frederick Harris Co. it includes the first page of the “Knitting” song and the cover was illustrated by the Starmer brothers.