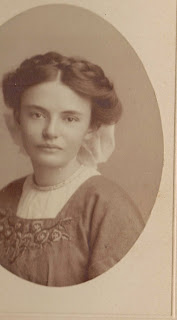 The Jenkins children were educated in England, where they lived at the family home in Littleham, Exmouth, Devon. Elinor attended Southlands School in Exmouth.  In 1912, following the death of Elinor's father, the family went to live in Kew.

During the First World War, Elinor worked as a Clerk for the British Government's MI5 Department.  According to research carried out by Phil Tomaselli, Elinor was still emplyed by MI5 when she died  on 28th February 1920 at the family home in Richmond.  Elinor was 26 years old.  Representatives from the office attended the funeral and the staff subscribed for a wreath.

Elinor's collection of WW1 poems was published under the title "Poems" by Sidgwick and Jackson of London in 1915.  Elinor's poems were also included in several WW1 anthologies.

Dulce Et Decorum?
We buried of our dead the dearest one-
Said to each other, ‘Here then let him lie,
And they may find their place, when all is done,
From the old may tree standing guard near by.’

Strong limbs whereon the wasted life blood dries,
And soft cheeks that a girl might wish her own,
A scholar’s brow, o’ershadowing valiant eyes,
Henceforth shall pleasure charnel-worms alone.

For we, that loved him, covered up his face,
And laid him in the sodden earth away,
And left him lying in that lonely place
To rot and moulder with the mouldering clay.

The hawthorn that above his grave head grew
Like an old crone toward the raw earth bowed,
Wept softly over him, the whole night through,
And made him of tears a glimmering shroud.

Oh Lord of Hosts, no hallowed prayer we bring,
Here for They Grace is no importuning,
No room for those that will not strive nor cry
When loving kindness with our dead lay slain:
Give us our fathers’ heathen hearts again,
Valour to dare, and fortitude to die.

Information supplied by Phil Tomaselli from KV 1/50 & KV 1/52 (The National Archives) and from the first edition of the MI5 female staff magazine "The Nameless Magazine".

With many thanks to Jacky Rodger who sent me a wealth of information about Elinor and her family members and discovered that Elinor's brother Arthur was also a poet;
and for additional information to