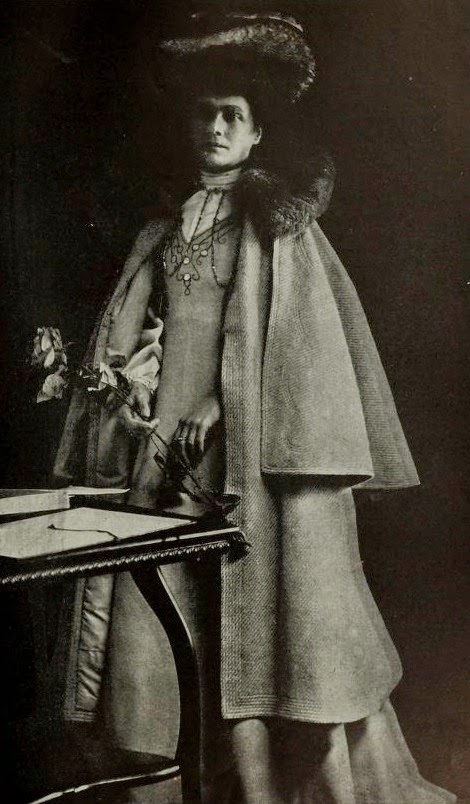 Mary Amelia St. Clair, who took the pen name May Sinclair, was born on 24th August 1863 in Rock Ferry on the Wirral Peninsula in the north west of England.  Her father was a wealthy shipowner.  May was educated for a while at Cheltenham Ladies College.

When she was in her teens, May's father died and she moved to Ilford.  In 1886 she published her first volume of poetry - using the name "Julian Sinclair".

When the First World War broke out May was a successful author, having published numerous novels and collections of stories as well as a highly respected biography of the Brontë Sisters called "The Three Brontës".  She was a keen supporter of the Suffragette movement and wrote pamphlets for the Woman Writers Suffrage League.

May joined Dr. Hector Munro's Flying Ambulance Unit as Dr. Munro's Personal Assistant and travelled to Belgium in September 1914 with the Unit, which she also helped to fund.   By then, May was 52 which in those days was 'old'.  After six weeks May returned home suffering from shell shock.  She wrote about her experiences in "A Journal of Impressions in Belgium", which was published in New York by Macmillan in 1915.

Three of May's nephews enlisted - two died and one was taken prisoner and returned home ill with pneumonia.  May nursed him back to health.

May continued writing after the war until she was diagnosed with Parkinson's Disease in the late 1920s.  She retired to Buckinghamshire where she died on 14th November 1946.

Here is an extract from one of May's WW1 poems:

Field Ambulance in Retreat
Via Dolorosa, Via Sacra

A straight flagged road, laid on the rough earth,
A causeway of stone from beautiful city to city,
Through the flat green land, by plots of flowers, by black canals thick with heat.

The road-makers made it well
Of fine stone, strong for the feet of the oxen and of the great Flemish horses,
And for the high wagons piled with corn from the harvest,
And the labourers are few;
They and their quiet oxen stand aside and wait
By the long road loud with the passing of the guns, the rush of armoured cars
And the tramp of an army on the march forward to battle;
And, where the piled corn-wagons went, our dripping Ambulance carried home
Its red and white harvest from the fields.

From "A Journal of Impressions in Belgium".

When I began my research, May was the first Female Poet I found and I felt it appropriate to remember her on 1st May.   There is now a May Sinclair Society - www.maysinclairsociety.com - and a Facebook Page https://www.facebook.com/maysinclairsociety/ dedicated to the memory of May.
Posted by Lucy at 13:05